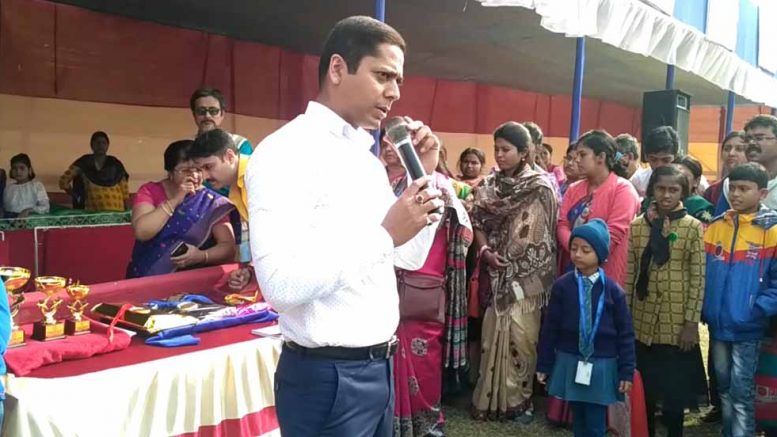 Krishnagar, Jan. 20: Concerned over the growing tendency of students making themselves vulnerable due to their sloppy activities in social media, Nadia superintendent of police Rupesh Kumar on Sunday appealed the parents to keep watch on their wards while they are using internet, particularly the social media.

The district police chief utilized an opportunity to interact with parents and students as well while attending a sit & draw competition at the Krishnagar Public School ground as chief guest.

He said, “Internet is easy to access. It has become an unavoidable part of our life. It is very useful and at the same time very dangerous unless used carefully. Inquisitive children soon know more about the Internet than the parents. Hence, it would be better if, as a parent, one gets involved in their Internet activities so that they can be taught to be safe. Both students and parents should learn about the positive and negative side of its use”.

Making an appeal to the parents, district police chief said, “Your children are still innocent. They may be trapped. So being their learned parents please be careful while your children using social media site. Please check their activities. If you find them busy chatting or active on social media in isolation, be careful and check what he or she is doing actually”.

Conveying a caution to the parents, Rupesh Kumar said, “There are a number of incidents occurred in this district where innocent children fell trapped. The girls are more vulnerable. Often we found that they open an account in Facebook and befriend with unknown persons, only to be lured by them and to be trafficked or to be involved to some illicit works”.

“So please brief your children about the danger of social sites like Facebook and improper use of internet. Please try to control their activities on such sites as far as possible at least until they are mature enough to realize the danger”, he added.

The district police chief who since joining the district has undertaken a serious of awareness initiative for school students about cyber crimes, also urged the parents not to give children personal phone unless it unavoidable.

“It would be better if you do not give your children personal phone, which most parents often do. Actually there are many platforms available in internet through which children often make themselves vulnerable by sharing personal information and accept many too without any verification”.

He also advised the students not accept or believe anything on face value. “Never share your personal information and respond to friend request to unknown persons. Be careful while on Facebook or on other social platform. You might be not aware that what you are watching is not true. There may be emails or text message to lure you with huge amount of money. But be sure that those are only to trap you. So never fell prey before the fraudsters”.

“Internet is easy to access. It has become an unavoidable part of our life. It is very useful and at the same time very dangerous unless used carefully” – Rupesh Kumar, IPS (SP, Nadia)

The Police chief shared an incident that how a businessman in Phulia fell trapped by a fraud racket being lured for a fake prize offer sent to him by an email. “He learnt a lesson by losing a whopping amount of Rupees 27-lakhs”, Rupesh Kumar added.

He also appealed the teachers to be careful in the same way and to organize awareness sessions for the parents as many of them might not be aware of usage of internet.

A guardian present at the KPS ground said, “The SP has rightly guided us and our children about the vulnerability. It would be better if schools come up to educate parents and students about the ways to avoid being victims”.