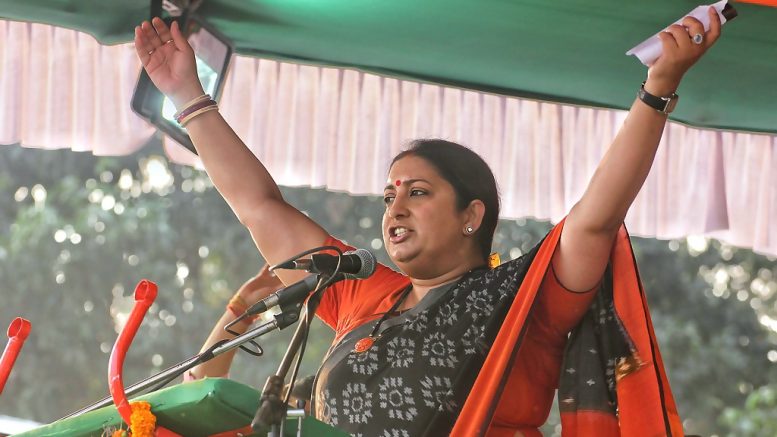 Krishnanagar, Jan. 24: Landing woes continue to pose trouble for union textiles minister Smriti Irani even on Thursday as she apparently forced to cut short her speech at a party rally in Nadia’s Krishnanagar to meet the return schedule by chopper that landed at Iskcon premise in Mayapur, 32km away from the venue. She landed at least by one hour behind the schedule owing to alleged delay caused by the district administration to issue landing clearance for her chopper.

The actor turned BJP leader could speak only for about eight minutes at a ‘Save Democracy’ rally in Sandhya Mathpara, located at the outskirt of Krishnanagar.

The Nadia BJP leadership blamed the administration for delay to issue landing clearance that forced the minister to arrive late late and to cut short her speech.

The party alleged that after much dillydally the  Nadia administration communicated landing clearance at 11.41am, which was quite late for making the final arrangements for landing for Smriti who was scheduled to speak at 2pm.

The minister eventually landed at the Iskcon’s helipad inside its temple premise in Mayapur at about at about 2.45pm, around one hour behind the schedule.

After exchanging pleasantries with Iskcon officials who received her as ‘guest’, she reached the venue at 3.30pm by road, 32km away from Mayapur and left within 20 minutes to meet the return schedule of her chopper speaking only for 8 minutes at the party rally.

On Wednesday too, Smriti had to call off her Suri rally as the district West Medinipur administration allegedly delayed landing clearance till the “last minute for Smriti to land in Jhargram for a rally. She was later forced to land at Kalaikunda helipad and drove about 50 km to reach the venue. The delay in Jhargram eventually forced her to cancel meeting  in Birbhum’s Suri. “Enthusiastic party supporters were literally deprived of a good speech by Smriti Irani due to a conspiracy hatched by Trinamul using the district administration that playfully delayed the approval. Had she was allowed to land in Kulgachi close to venue, she could have stay and speak for more times. But, district administration denied the landing there and we were forced to arrange the Iskcon helipad”, alleged BJP Nadia’s North committee president Mahadeb Sarkar.

“Since Amit Sha’s meeting was announced, the Trinamul led Government tried best to put hindrances. After Smriti Irani’s meeting was announced the district administration turned down our appeal for landing at three different places since January 21 showing technical reasons which have, however, no valid logic. Finally when the Iskcon agreed to allow the landing at their helipad, the district administration deliberately delayed the final approval”, Sarkar alleged.

“I communicated the NOC of Iskcon on Wednesday night. Nevertheless, the district administration given its nod as late as at 11.41am today”, he further added.

Iskcon’s Aloy Gobinda Das said, “We received an appeal from the minister’s office yesterday wishing for a ‘Darshan’ to the temple. We cannot deny any such request and given our nod for landing inside our premise. But, final clearance of landing rests with state administration. We have no knowledge of any controversy about her landing. We received her as a guest today. She, however, visited the temple for few minutes before takeoff”.

BJP leader Mukul Roy said, ‘Inspite of a clear NOC by the Nadia DM acted as per the direction of his political boss”.

Nadia district magistrate Sumit Gupta rubbished the BJP’s allegations. He categorically said, “The BJP leadership submitted an application to use Iskcon’s premise for landing along with their NOC at 9.30am today. They sent the NOC on yesterday night through whatsapp message, but there was no application from party. Nevertheless, the permission was accorded within two hours after doing necessary official formalities. I have no idea why they are raising such allegations”.

“Earlier on 22 January they appealed for use a ground in Kulgachi for landing, but the WBSEDCL raised objection due to existence of high tension electric cable near it. So the clearance was no issued on technical reason. There was no conspiracy”, Nadia DM added further.