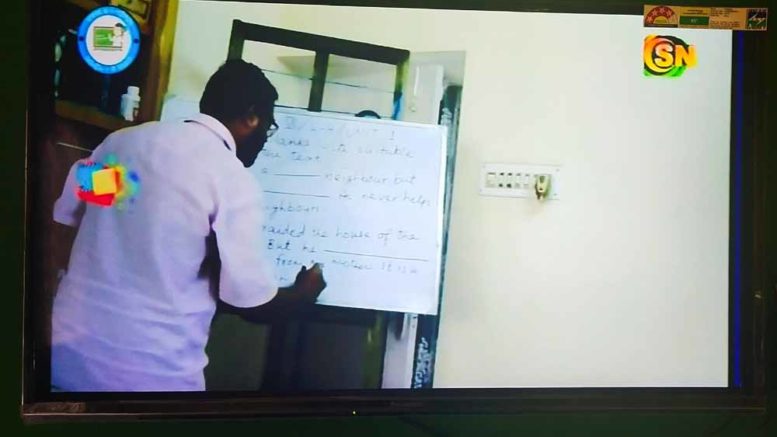 Chakdaha, May 19: In an attempt to compensate the loss of classes suspended owing to the nationwide lockdown for the Covid situation, the Chakdaha block administration in Nadia has launched an ‘ePathshala’, a cable channel based regular classes for students of state board reading in from class VII to X.

For about the past one month, lesions through ‘ePathshala’ being imparted to the students in two sessions, each of six hours. The first begins at 8 am which resumes after a break at 2.30 pm every day.

A number of schools have launched online classes using an android based mobile phone during the lockdown. Nevertheless, a large number of students could not be brought to the virtual platform owing to the unavailability of the devices at their homes. At the same time, poor network coverage in rural areas also poses a bar before them.

‘ePathshala’ is aimed to reach maximum students belong to economically backward families through the local cable television network so that they are not lagged behind and suffer academic loss.

With this objective, Chakdaha block administration has created a pool of about fifty interested teachers who have joined the endeavor agreeing to offer service.

“It would be better if the administration considers continuing the initiative at least in a smaller version even after withdrawal of lockdown” – Manotosh Sarkar, Retired Teacher

The teachers have been creating video lessons on specific topics using their mobile phones which are later being uploaded to a dedicated cloud drive to be downloaded by the broadcasting partner. Each of the video lessons is also being subsequently uploaded to YouTube after transmission.

A WhatsApp number has also been provided to the students for any clarification on the delivered lecture, an official said.

The brain behind the initiative Puspen Chatterjee, Chakdaha block development officer said, “The students have

been suffering a lot for lockdown. They would be under tremendous pressure when the academic activities resumed at schools. A number of schools have taken initiatives to help students using the virtual platforms so that they do not lag behind owing to the delayed session. Nevertheless, many students failed to take this benefit since they either do not have the requisite device or faced barriers to communicate due to poor network”.

To meet up the academic requirement, the block administration invited the headmasters in a meeting early last month, when senior teachers from different schools were requested to lead different faculties.

Manotosh Sarkar, a retired National award winner headmaster was entrusted by the administration to manage the initiative as the main coordinator.

Speaking to NfN Sarkar said, “This is a great initiative by the BDO who deserves an accolade for considering the problem of the many students whose parents do not own smartphones or personal computers to enable them to attend virtual class. The teachers have also responded very well. They come up with eagerness to support the students. It would be better if the administration considers continuing the initiative at least in a smaller version even after withdrawal of lockdown”.

Rik Choudhury, a student of class X said, “I became very anxious being lagged behind as many of my friends were attending online classes. My father does not have a Smartphone, so I was missing lessons. But, the classes aired through cable television helping me a lot”.