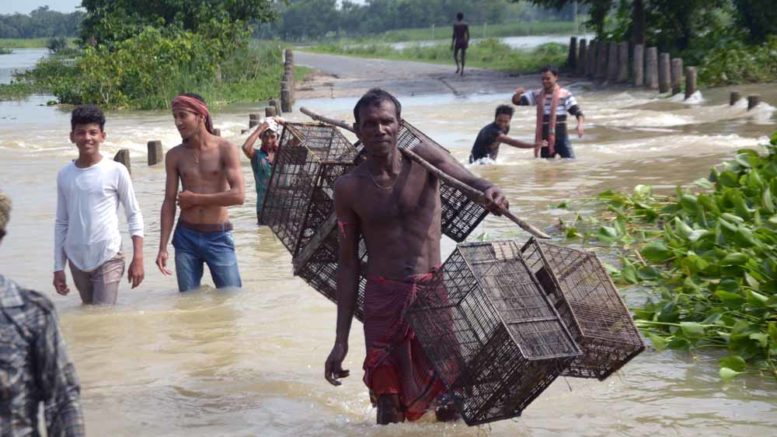 People walk through an inundated road in Majhergram village of Nakashipara

A flood-like situation was created in some parts of Nadia and East Burdwan district following a large stretch of the river Bhagirathi had overflown and inundated the adjacent areas since Friday night. The water level in Bhagirathi has increased apparently due to continued rain in the North Bengal where a flood-like situation has already been created. In Nadia, vast areas under Majhergram panchayat under the Nakashipara block became most affected so far with an arterial road connecting Agradwip ghat went underwater making some village inaccessible. A team of Nadia administration visited the area. An officer of the administrative team said, “The area is low lying one and became affected fast since the river water has overflown and inundated adjacent areas. We are monitoring the situation…However, so far no human habitation has been required to be shifted”.

A similar situation was seen in Santipur town’s Char Saragar area under Ward-16 where large agricultural production was damaged since the river has overflown and inundated the area. On the other hand, incessant rain has flooded many areas in Amra village under the Burdwan-II block located adjacent to NH-2.