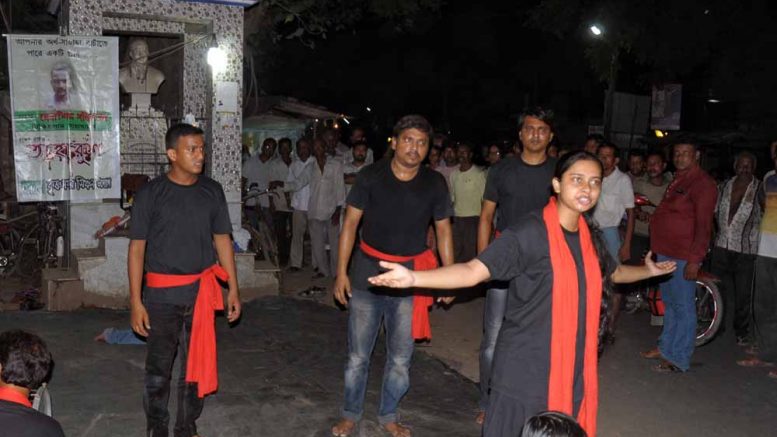 Krishnanagar, Oct. 18: Members of a theatre group in Nadia’s Krishnanagar have come up to raise  fund by enacting street plays to save life of poor LPG cylinder delivery man who has been suffering from brain tumor. Since October 10, the members of ‘Krishnanagar Sinchan’ theatre group have been performing “Taharush”, a contemporary play about sexual violence on women, on streets and market places with an open appeal for donation so that they could save life of Debasish Pandit (41), who would undergo brain surgery at Bangalore based National Institute of Mental Health and Neuro-Sciences (NIMHANS) in the next month.

‘Krishnanagar Sinchan’ members have decided to raise at least Rupees 1-lakh for Debasish, who is bed ridden for over a month, so that he could maintain his family during the pre and post operation period and also could meet the expenses of his accompanists in Bangalore.

A resident of Saktinagar, Debasish who works under Hindustan Petroleum LPG distributor in Krishnanagar was diagnosed brain tumor during May. He was admitted to Saktinagar district hospital and advised surgery.

Theatre director and founder of ‘Krishnanagar Sinchan’ Susanta Halder, a teacher by profession, said: “Debasish is the only earning member in his family which include his wife and two children. Since he is not in a position to work and became bed ridden, the family is in deep trouble. So we have launched a drive to raise fund so that he could meet daily needs of the family and his expenses in Bangalore as well”.

When asked about the reason that prompted this fund raising drive, Halder said: “Actually we took the initiative after one of our group members Rupa told us about Debasish and requested us to help him. We visited his home and decided to help him”.

The first show was held at Krishnanagar Centrum complex. The first day’s collection was Rupees 3500.

So far ‘Halder and his team have performed four shows and collected about Rupees 20000.

“I lost hope to survive when learnt about the brain tumor. But, these youths have injected fresh hope in me to survive” – Debasish Pandit, Brain Tumor Patient

‘Krishnanagar Sinchan’ member Rupa Karmakar, who taken the initiative said: “I was horrified when one day Debasish da fell unconscious while delivering the cylinder. He was taken to hospital where doctor diagnosed it as brain tumor. Since then he could not work as he gets unconscious frequently”.

“Watching his plight I told my friends to help him and they responded well”, Rupa added.

Moved by the gesture Debasish said: “I worked on ‘no work no pay’ basis and earned around Rupees 6000 per month. I lost hope to survive when learnt about the brain tumor. But, these youths have injected fresh hope in me to survive”.

Breaking in tears Debasish’s wife Alpana said: “We will remain indebted to these young theatre actors for ever. It appears that God has sent them to save us”.