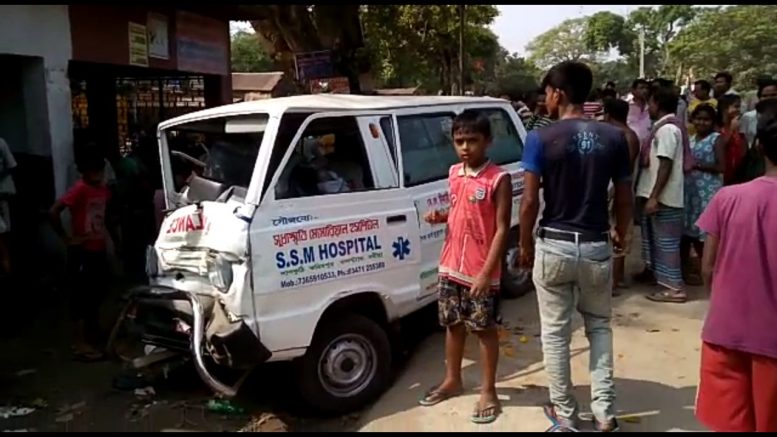 Karimpur, Oct. 18: Two morning walkers having tea at a road side tea stall died when an ambulance running in a high speed lost control and hit them at Kanthalia market near Karimpur town on Krishnanagar-Karimpur state highway on Wednesday morning.

Ramen Bairagya (26) and Dhananjay Mullick (55), who were seated in front of a tea stall adjacent to the road died on the spot as the vehicle mowed them after hitting tree and a cycle van.

They were rushed to Karimpur state general hospital where both the victims were pronounced brought dead.

Police have arrested Mohon Agrawal (29), driver of the ambulance and started a case against him for causing unintended death. The driver was also injured in the accident. The locals rescued the driver and handed him over to police who took him to hospital.

An officer of Karimpur police station said: “The ambulance driver has been arrested and booked for causing death due to rash and negligent driving”.

The incident occurred at 6.30am when the empty Maruti Omni van turned ambulance was returning to Karimpur town from Calcutta after admitting a patient to a hospital there last night.

After preliminary investigation an officer of Karimpur police said that it appears that the driver of the vehicle was most probably became snoozy.