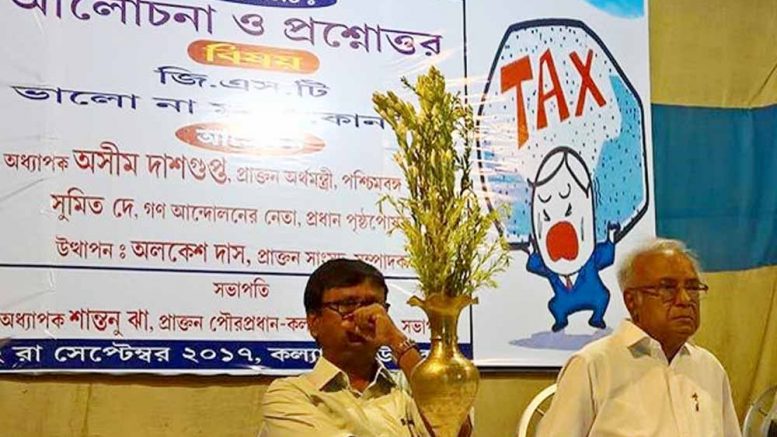 Kalyani, Sept. 2: Former state finance minister Ashim Dasgupta today expressed his concern about the hurried way the ‘Goods and Service Tax’ (GST) being implemented by the centre ignoring the need of preparedness of the traders and businessmen across the country.

The senior CPI (M) leader who was the chairman of the “Empowered Group of State Finance Ministers”  that initially drafted the GST laws during 2009, today said that in a country where around 60% of the traders and businessmen are illiterate about computer, such computer based tax calculation would create major misconception and troubles in the market.

“It was very important that the Government to impart necessary training to sensitize them about the law. But nothing has happened as such”, Dasgupta said.

The elderly professor in Economics who is one of the key architects who done the daunting task of formulation of the GST laws and about whom union finance minister Arun Jaitley made special mention in his launching speech, now strongly feels that the ‘GST laws introduced by the centre have certain shortcomings and lacunae which need immediate rectifications”.

“It was very important that the Government to impart necessary training to sensitize the traders and businessmen about the law. But nothing has happened as such” – Ashim Dasgupta

“The GST laws and its calculations have created major confusions in the minds of traders and businessmen. A lot of things remained untold. In absence of knowledge in computer, many businessmen are getting it tough to understand the laws. It appears that the sudden implementation of the law have some hidden vested interest of a section of big businessmen, industrialists”, Dasgupta said during an interactive seminar titled “GST: Bhalo Na Mando – Konti” (GST: Good or Bad – which one), organized by Kalyani unit of November Revolution Centenary Committee held at Town Club auditorium in Kalyani on Saturday evening.

The centre rolled out the biggest tax reform, Goods and Services Tax (GST) on July 1 after a mega midnight launch at the Parliament’s central hall, where Dasgupta, was probably the only CPI (M) leader present despite a difference with party line.

Speaking at the occasion, Dasgupta, who was the finance minister for 24 years during the Left Front regime, said: “People were not prepared about the GST. The sudden implementation has made life miserable for the people in the country. Many life saving medicines have been taxed making it beyond reach of common people. Even accessories of physically challenged persons have been taxed hugely under GST laws. The sanitary napkins also got no exemption as it has been charged 12% GST. The sweet manufacturing industry is in trouble as GST has been charged on sweets creating a sort of survival crisis for the sweet manufacturers”.