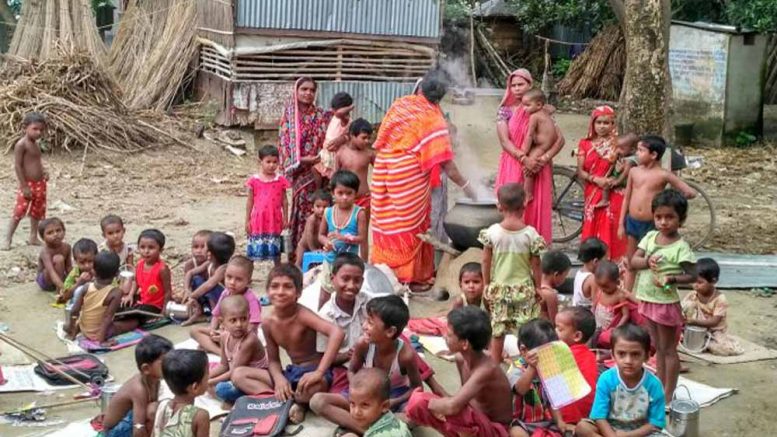 An ICDS centre running under sky in Mahishura village in Nabadweep.

Krishnanagar, Sept.4: Nadia administrations has decided to construct Integrated Child Development Scheme (ICDS) centres on the unused lands of nearby government aided schools as it failed getting villagers to donate small piece of land to construct their own centres.

As per provision, the ICDS project launched in 1975, which is aimed to improve the nutritional and health status of children up to 6 years and to impart pre-school education, the administration has to depend on donation by villagers apart from using government land to build own accommodation as purchase of land is not permitted.

Getting no such land the Nadia district administration have decided to construct 300 such centres in this financial year, for which work orders have already been issued.

As per the ICDS guidelines at least 3 decimal lands (2 cottah approximate) is required to build an ICDS centre. But in Nadia, the villagers are not interested to donate the land.

As per official records, at present Nadia district has 2764 ICDS centres out of total 6620, which are either running under rented house or at free accommodations. However, many of these centres literally running under open sky where daily food for children being cooked and served under the sky in very unhygienic way.

However, the district administration, ruled out that no such centre has at all been running under open sky.

The newsfromnadia.com, however, found an ICDS centre at Majher Chara colony under Mahishura panchayat of Nabadweep running under open sky. Centre in charge Tagari Halder said: “For about last ten years, the centre has been running under sky. It is actually officially housed on the corridor of a local villager, but practically the space is so insufficient that it becomes impossible to accommodate 120 children there. So we are compelled to come under the sky to cook food and serve them unless it is raining”.

Kanchan Sarkar, an assistant of the centre said: “In absence of any toilet, the children face great difficulties as they often use open place to urinate creating unhygienic situation”.

When appraised about this centre, District project officer (ICDS) Bhaskar Ghosh after an inquiry said: “We were not aware of the problem. We would soon shift to a rented accommodation. Initiative is also being taken to build own house for it”.

ICDS Officials in Nadia say that ‘land’ problem has become a major issue to run the ICDS centres properly. “Due to increase in price of land even in rural areas, the villagers now not eager at all to donate land. In rural areas the price of 3 decimal land is now about Rupees 2lakh. But as per provision we cannot purchase land. On the other hand, the centres on rented accommodation have been running at the mercy of the house owners as they often create problems”.

ICDS project officer of Nadia, Bhaskar Ghosh said: “This is become a very serious problem. Nobody wants to donate land for ICDS centre. To solve the problem we have started construction of ICDS centres on the unused land of nearby school premises”.

Ghosh, however, pointed out that in many areas nearby schools could not be found to shift. “So we have to depend on rented accommodate unless any government land is found”, he added.