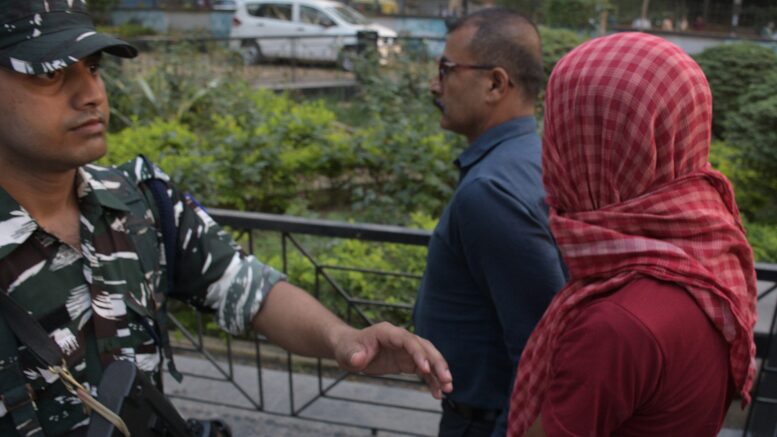 Ranjit Sarkar being taken to ACJM court in Ranaghat

Hanshkhali (Nadia), April 16: The CBI team that is investigating the alleged rape and murder of a minor girl in Nadia’s Hanskhali made the first arrest on its part when it picked up a close aide of Prime accused Sohail Gayali on Saturday afternoon.

This is apart from the two other accused persons that include prime accused Sohail Gayali alias Brajo and his close friend Prabhakar Poddar who were earlier arrested by local police before the CBI took up the probe.

With the arrest of fresh accused Ranjit Mullick, 21, from a hideout in Ranaghat, so far three persons arrested in connection with the case.

On Saturday, the probing tram that has been working groups, apart from making the arrest, has begun recording the statement of the victim’s parents and her family members as well as the accused persons involved in the alleged crime.

On Saturday the CBI team picked up Ranjit with the support of local police, a day after the sleuths raided his house and collected evidence of his suspected involvement in the crime.

He has been charged with rape and murder. The CBI will produce him before the ACJM court on Sunday seeking custody for interrogation. With the arrest of Ranjit, a total of three persons arrested so far in connection with the alleged gang rape and murder of the minor girl in Hanshkhali.

Police and CBI sources said that Ranjit’s name surfaced up in connection with the case on Friday evening when the CBI team went to Prabhakar’s residence to search for evidence. During the search, it was Prabhakar’s mother who informed the sleuths that she witnessed Ranjit vomiting on the road after attending the party and fell ill.

The fact was corroborated by the sleuths while questioning Sohail on Saturday morning at its camp office in Krishnagar.

“My son found Rajit ill on the road and vomiting. He helped him…But police implicated him with false charges” the elderly woman said claiming the innocence of her son Prabhakar.

The CBI team immediately raided Ranjit’s residence and collected the dress he donned on the date of committing the crime for forensic examination. The sleuths also later sealed his room.

Earlier on the day, the CBI began recording statements of the accused persons as well as of the victim’s family members. Apart from prime accused Sohail, the sleuths brought the victim’s mother and her cousin’s brother to record their statement.

CBI sources claimed that all the three accused arrested so far would be questioned together to corroborate the factual details of the alleged rape and murder.