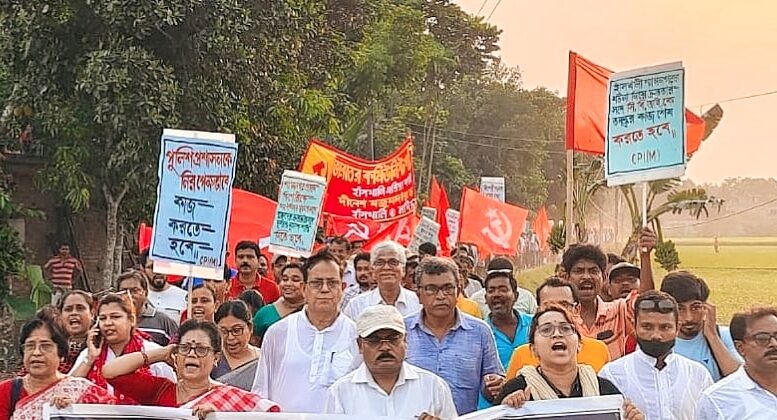 Hanshkhali (Nadia), April 17: CPM secretary Mohammed Salim has alleged that the ‘rape’ has become the signboard of Bengal courtesy to a bunch of “irresponsible policemen” who have a patron none other than Chief Minister Mamata Banerjee.

“Most of the officer in charge of the police stations are irresponsible and seems to have lost their human instincts… the SDPO, SPs are no exception..who get indulgence from Chief Minister who unfortunately blamed the rape victim and raised the question of her character”, Salim told the newsperson in Nadia’s Hanshkhali on Sunday after meeting the parents of the minor girl who was rape and killed on April 4 by the son of a local Trinamul leader and his close aides.

The body of the girl later took control of the accused youths and other politically influential persons of the ruling party at gunpoint from her house who eventually cremated it without any death certificate or post mortem. The parents of the girl could not dare to lodge a police complaint under threat until April 10 when a voluntary organization extended support.

“It is a shame that the police mysteriously enough could not come to know about the incident and the parents also could not dare to lodge any complaint…This is the state of the law and order situation in Bengal”, Salim said flaying the state administration. “It is a pity that our Chief Minister has blamed the victim girl for her tragic death..what she publicly said actually means that nobody should get into lover affair, should not go out of the home. She even apparently raised questions about the girl’s character unconcerned about the security of the women in the state”, Salim said adding ‘the girls of Bengal want security’.

Flaying the Chief Minister Mamata Banerjee for the deteriorating law and order situation and spate of crime against women, the CPM state secretary after meeting the victim’s parents said, “…she made the state a haven for criminals …if this continues people in Bengal would not forgive her”.

The newly-appointed state CPM chief also alleged that the victim’s parents are just a symbol of how poor people in the rural Bengal have benefitted through the state and central sponsored welfare schemes as most of the deserving families like the Hanshakali victim could not so far manage to have a roof on their head. The CBI meanwhile on Sunday produced the fresh arrest of Ranjit Mullick before the ACJM court in Ranaghat.

Witnessing the horrible poverty of the victim’s parents who have also no roof over their head, Salim alleged that the family is a symbol of how the poor people in Bengal get the shelter under the housing scheme. “We often see so many signboards of Bengal Aways Yojonoa….but Rape has become the real signboard”.

The CPM leader on Sunday walked in a protest rally in Hanshkhali demanding the arrest of all suspected persons including the dreaded local panchayat member. He said of the irresponsible and prejudicial approach of a section of the police, people have lost faith in their investigation and used to demand CBI probe even though they don’t at all do their job fair enough.

“During the past few years, the CBI was entrusted with a number of cases for investigation. But none of them could have a logical conclusion. We hope this time there would be no such repetition and our party would monitor the development in the case”, he told the reporters.

Meanwhile, on Sunday the CBI produced the arrested third accused Ranjit Mullick before the ACJM court in Ranaghat, which ordered 12 days of custody for him.

CBI sources said that all the three accused so far arrested would be questioned together soon. The investigating agency would soon file a petition seeking approval for a DNA study for the accused persons.