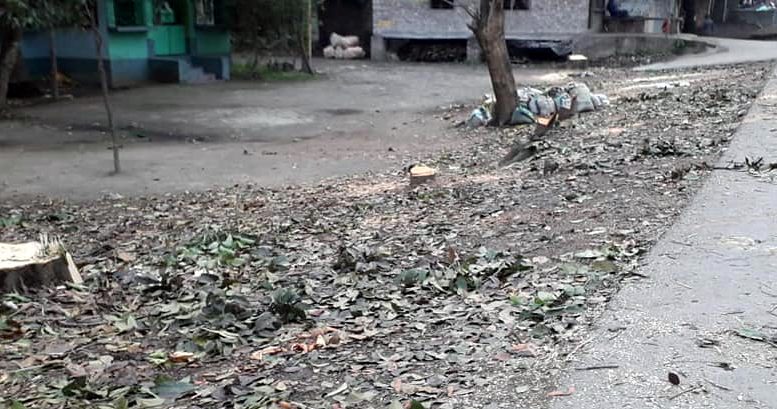 Chakdaha, March 17: Two nature care activists have filed a petition before the Calcutta High Court seeking a directive to the state Public Works Department to stop the ongoing four-laning work of 27.44-km road stretch between Chakdaha and Bangaon unless it undertakes compensatory planting of trees. The duo has alleged that the construction company engaged by the state government to execute the road works has already cut off around 200 trees out of 1600 marked ones that come on the proposed widened stretch. However, it has so far not undertaken any compensatory planting.  The petitioners have also alleged that during 2006 while developing the same stretch into two-lane, the agency engaged by the state government had felled 351 trees without any compensatory planting.

As per the existing law, any compensatory planting should be done before the felling of the trees.

A Division Bench of Calcutta High Court on Thursday allowed the petition for a hearing on Friday. However, the hearing was postponed, which is expected to be heard this week.

Petitioner Piyali Mandal said, “We have made a prayer before the High Court so that it sympathetically considers issuing an order to stop the work until and unless the executing agency begins the compensatory plantation work”.

Sources said that in last year the state-owned West Bengal Highway Development Corporation (WBHDC) undertook the widening (four-laning) and strengthening of 27.44 km stretch of Chakdah-Bongaon road. The project work also includes two truck terminuses. A railway over-bridge and a flyover will be constructed separately on the stretch also. The estimated cost of the project is Rs. 389.67-crores.

“The plantation work will be taken up only after the execution is completed. It will be taken up in the 1.5-meter wide land that will be left after completion of the work on either side beyond the edge of the road” – Sukanta Ghosh, Project Manager, Executing agency

The stretch of the road has significant importance as it in one end connect NH-12 and in the other end meets Petrapole on the Bangladesh border, which is Asia’s largest land port. All the Bangladesh bound buses, Lorries use this stretch largely coming through NH12 from Calcutta to avoid the congested Jessore road.

Mithun Roy, another petitioner, alleged that the staff of the executing agency has been randomly cutting trees. “It is very painful to see that matured old trees like Banyan, Chatka, Sagoon, Jarul, Sishu, Babla being cut off randomly. We asked them to ensure planting trees first, but they ignored”.

As per the existing provisions, the Forest department issues approval for cutting off trees required for carried out development projects. However, such an order is issued on condition that an equal number of trees will be planted in lieu of the trees to be felled. However, the forest department did not bother to monitor the felling of the trees and to ensure mandatory compensatory planting.

In reply to an RTI query the Executive Engineer of PWD’s Kalyani Construction Division has acknowledged that during the double laning work of the road in 2006, the department had “cut down” 351 trees and “no plantation work was undertaken”.

Activist and petitioner Piyali Mandal said, “We will not allow the same thing to happen this time. We are not against the widening job, but the PWD should take care of environmental aspects”.

Sukanta Ghosh, project manager of the executing agency, however, rubbished the allegations. “We have just begun the preparatory works and clearing land by cutting trees. The plantation work will be taken up only after the execution is completed. It will be taken up in the 1.5-meter wide land that will be left after completion of the work on either side beyond the edge of the road. So it would be ridiculous if anyone expects such plantation right now”.

“We had to make a security deposit for the purpose which will be forfeited unless it is done”, Ghosh added.