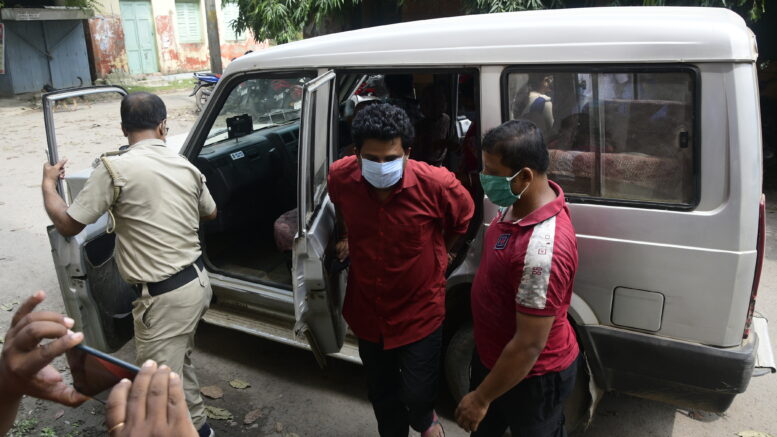 Adyanath being taken to court in Krishnanagar

Bhimpur, Sept. 29: Police have arrested the head of a BJP ruled gram panchayat in Nadia’s Bhimpur allegedly for marrying a minor girl, aged 16, on the basis of a complaint lodged by the Nadia district administration.

Adyanath Sarkar, 38, a prominent face of BJP’s youth wing, was arrested from his home in Kulgachi area of Bhimpur, located at the outskirt of Krishnagar, on Tuesday morning barely within 10 hours since the District Child Marriage Prohibition Officer of Nadia lodged a complaint against him at Bhimpur police station for marrying the class X girl from Memari area of East Burdwan district. The incident came as a big shock for the movement against child marriage since the pradhan of a gram panchayat is by virtue of his position is the default chairman of the local child protection committee. An official of state social welfare officer said, “This is a shocking act by a man who by his position assigned to protect children being a member of the local administration”.

Accused Adyanath, head of Poragacha gram panchayat, was charged under section 9 of the Prohibition of Child Marriage Act, 2006 and produced before an additional district and session judges court in Krishnagar which ordered 14 days of judicial custody for him. At the same time, police have also recovered the girl from the BJP leader’s home and produced her before a court through the child welfare committee which handed over the girl to her parents.

Police have also accused the priest of a local temple under section 10 of the Prohibition of Child Marriage Act, 2006 for organizing the marriage of the minor girl. The priest, however, went absconding. If found guilty, both the accused shall be punished with rigorous imprisonment which may extend to two years or with a fine which may extend to Rs.1 – lakh or with both, a lawyer said.

The incident has left the Nadia BJP leadership embarrassed who tried to isolate the party from the incident while advocating for legal action against the pradhan.

Local sources said Adyanath allegedly married the girl, a student of class 10, on September 9 following a courtship, which was solemnized at a temple in Nadia. Local people came to know about the marriage a few days later when Adyanath planned to throw a reception on September 25. He later posted a number of pictures of the bride on his Facebook wall prompting many in the area to raise questions about the marriage.

Knowing about the incident a ‘Childline’ team along with police visited the BJP leader’s home and asked him to show age-proof of his ‘wife’. But, this infuriated the Pradhan who abused the Childline officials and drove them out.

“We humbly asked the Pradhan to show relevant documents in support of age that is eligible for marriage. But, he refused to cooperate and failed to show any such document to prove that the girl he married is an adult. He rather abused us. Eventually, we appraised the District Administration, which took up the matter with police”, an official of Childline told The Telegraph.

SDO, Krishnagar (Sadar) Manish Verma said, “We received a complaint from Childline and begun an inquiry. The prima facie evidence indicated the allegations are true and also revealed the age of the girl is only 16. We also checked the Kanyashree database which also corroborated her age as 16 and eventually the police complaint was lodged”.

An official of the Child Marriage Prohibition wing of the district claimed an abnormal trend of child marriage during the past six months of lockdown. “Since April we have recorded 75 cases when the marriage of minor girls was stopped and in two cases arrest was also made”.