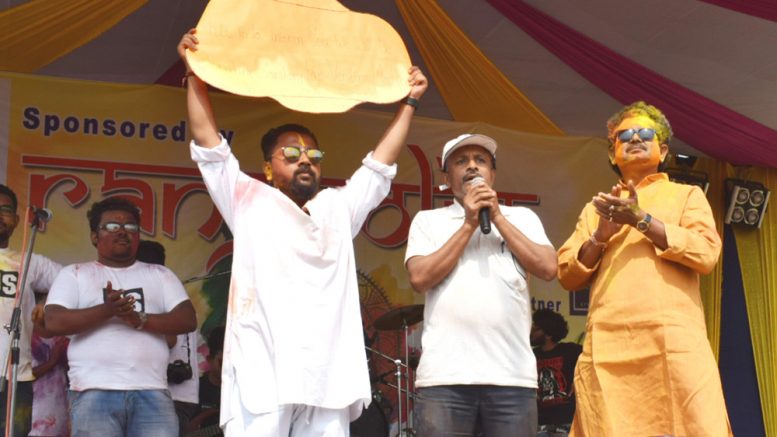 A member of the organisation with a replica of sanitary pad at the carnival.

Kalyani, March 1: A Kalyani based social welfare organization today arranged a carnival on the occasion of Holi with an entry fee to donate sanitary pad vending machines for the girls at three schools in the neighborhood using the fund it garnered for the occasion.

Members of US, saved about Rs.90000 from the fund it collected by selling entry passes, which they will use to buy three vending machines.

Sayak Banerjee, a student of Digital Marketing at Calcutta University and a founder member of US said: “Our aim is to create awareness among rural girls and to involve people to help rural girls to overcome the taboo about menstrual cycle which exists in society. So we appealed people to join the carnival contributing Rs.100. We told them that fund will be used to donate vending machines. Today about 1500 persons joined us today”.

Guests were offered free colors along with a complimentary plate of ‘Jalebi’ to satisfy their tongues with dance and music.

At the event replica of the machines and sanitary pad were handed over to the representatives of  schools. The machines will be installed early next week. US announced that will also refill the machines for the coming one year.

Sayak said: “Our objective is to create awareness among the girls in rural areas, where concept of menstrual hygiene is still very poor and the girls feel uneasy to speak about their menstrual cycle”.

A few months ago US conducted a survey at some schools outskirt of Kalyani and found poor concept of menstrual hyegene among girls.

Raktim Banerjee, a member of the organization said: “We found that school going girls go by advice by their mothers, who still adopt unhealthy ways during period. So we launched an awareness programme in those areas and eventually decided to donate the vending machine as many families are not financially capable to afford sanitary pads”.

Sayak said: “We will install one vending machines each at Ghoshpara Saraswati Trust Estate Vidyapith in Kalyani and at two other schools which will dispense sanitary pads at the touch of a button. We are also trying to napkin incinerators for environment friendly disposal”.

Sripada Mandal, a teacher of Ghoshpara Saraswati Trust Estate Vidyapith said: “Menstrual cycle is part of our life. So the girls should not feel ashamed of it. I think this machine will help them overcome the uneasiness and they would freely use it”

Sushmita Dutta Roy, a young homemaker, who joined the carnival today said: “The boys have used the holi for a great cause. I have never enjoyed it in such a way. As a woman, I think sanitary pads are very necessary for health and hygiene for every girl. But, unfortunately its use is still very low among women in rural areas. There are also many women in urban areas who are hesitant to go shops and buy pads”