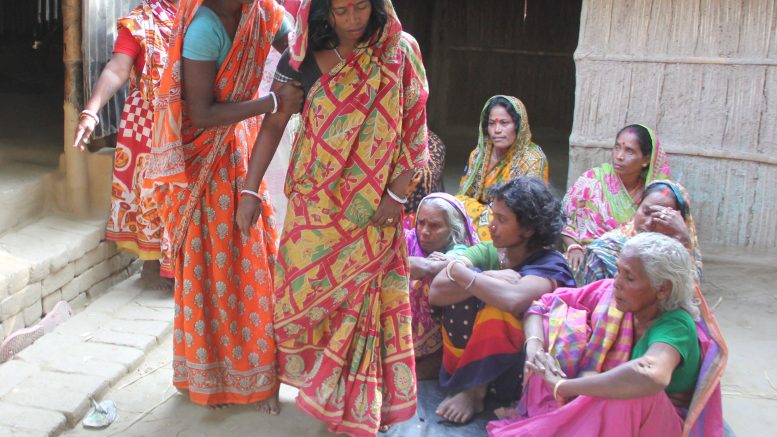 Family members of the deceased persons broke down in tears

Santipur, Nov. 28: At least ten persons including a woman died and about twenty others fell ill as they had consumed suspected spurious liquor in Nrisinhapur Choudhury para area of Nadia’s Santipur since the early hours of Wednesday morning.

Three persons died at Kalna sub divisional hospital, two at Santipur state general hospital, and two at Kalyani’s JNM Hospital whereas one person died in Bali in train on way to Kolkata and the other at home.

Family members of the victims said that on Tuesday they consumed liquor as they used to do from four different hawkers who sell it in polythene pouches. Each of the pouches contains 200 ml liquor and sold at Rs.20.

Trouble began since Tuesday evening when people started complaining of burning feeling inside stomach along with nausea and darkness in the vision. Those who fell ill were taken to Kalna sub divisional hospital and to Santipur state general hospital and later on Wednesday evening to JNM Hospital and Saktinagar district hospital.

At present at least 16 villagers are admitted to Santipur state general hospital and 13 in Kalna. A medical camp led by CMOH Nadia has been set up in the area to monitor condition of the villagers.

Police case started on the basis of a complaint lodged by Bishu Mahato by charging the six accused persons for causing hurt by poison(IPC section 328 ), for adulteration in drink (IPC section 272 ), for sale of noxious drink (IPC section 273 ), for culpable homicide not amounting to murder (IPC section 304) and under section 46 of Bengal Excise Act for unlawful import of intoxicant.

Police have arrested four out of the six person named in the FIR. They are identified as Sadhan Biswas, Joydeb Santra, Jayanti Mahato and Guchia Mahato. However,  another accused held by the police identified as Chandan Mahato died at JNM Hospital in Kalyan in evening.

The state  government, meanwhile, ordered a CID probe into the matter and expelled 11 officials of Excise department which include three  senior level officers and eight constables of Ranaghat circle for their alleged dereliction in duties.The suspension was announced by state excise department minister Amit Mitra.

Local residents have blamed police and excise officials to allow selling of liquor unabated despite their objection.

A compensation of Rupees two lakhs has been announced by the state government for the kin of the seven persons died in the tragedy.

Inspector General (South Bengal) Neeraj Kumar Sing, ” It is not immediately possible to identity the cause behind deaths. A probe has been started involving the Police, Excise Directorate and other concerned and samples of spurious liquor were sent for test in Kolkata”

However, doctors at Kalna and Santipur hospital who visited the patients suspects existence of high level of methanol or methyl alcohol in the liquor led to poising.