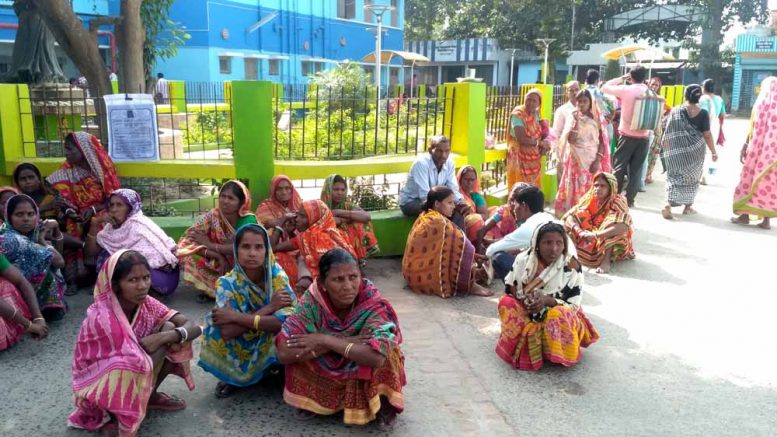 Santipur, Nov. 29: Death toll in the Santipur hooch tragedy increased to 12 since 2 more persons died at the District hospital in Krishnagar on Thursday morning. The medical team which has camped in the tragedy stricken Nrisinhapur village has found 13 more persons writhing in pain at a brick kiln after consuming the spurious liquor two days ago. They were taken rushed to Santipur state general hospital for treatment. However, they had to be shifted soon to Kolkata based hospitals later in the evening due to their deteriorating conditions.

The two deceased were identified as Krishna Mahato and Gangadhar Mahato, who died early in the morning.

Doctors who have been monitoring treatment of the victims have claimed that death toll could increase further as conditions of some of the patients are very serious. Crowded Nrisinhapur village after the tragedy

Meanwhile, in an apparent admission of the lapse on the part of local police authorities, the state government on Thursday removed Saurav Chatterjee, officer in charge of Santipur police station. He has been ‘closed’ and shunted to District police line in Krishnanagar. However, senior police officers in district police administration refused to comment about the removal of the OC. Chatterjee has been replaced Mukunda Chakraborty, who was officer in charge of Dhantala police station.

Inspector General (South Bengal) Neeraj Kumar Singh, who met family members of the three victims in Nrisinhapur said,”A probe is on which indicate that the illicit liquor used to be supplied from Kalna. We have arrested four persons and detained some for interrogations”.

Police have on meanwhile, raided several areas in Kalna and Santipur and zeroed on two persons from Kalna – Jeevan Krishna Pal and Kalupada Pal as the main manufacturer of the hooch who also used to supply it to Nrisinhapur village through their six agents. Five of the agents were arrested by police, while the other Chandan Mahato alias Gulbar died as he also consumed the spurious liquor. He died at JNM Hospital in Kalyani on Wednesday night. three were taken to police custody for three days. However, Guchia Mahato, an accused had fallen ill at court and admitted to hospital. Family sources said, Guchia had also consumed the spurious liquor.

Meanwhile, SUCI has called a 12 hours Nadia bandh on Friday condemning the lapses on the part of the government. A BJP team led by Mukul Roy and Kailash Vijayvargiya would visit Nrisinhapur on Friday to meet bereaved family members.