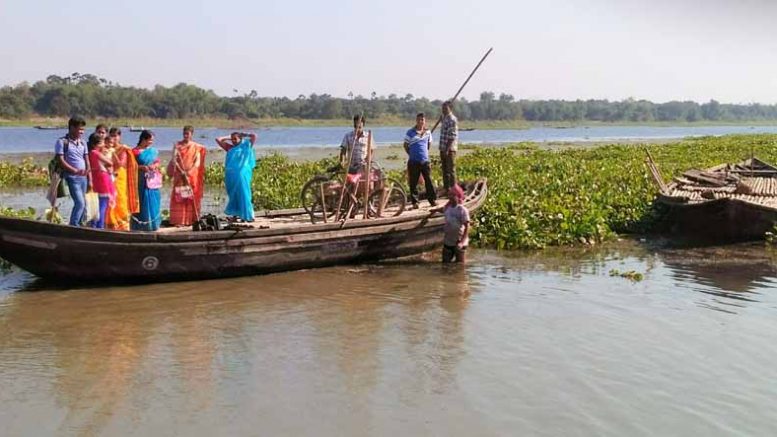 Santipur, Nov. 16:  A thick cover of water hyacinth infested over a stretch of about 2-square kilometre stretch of a canal of Ganga under Baghanchra panchayat in Nadia’s Santipur has made at least four village almost inaccessible.

Water hyacinth is an invasive fast growing aquatic weed that surfaces on water bodies and form daughter plants, which can reproduce thousands of seeds to remain viable for over 20 years. For about ten thousand villagers who live in Char Paanpara, Khounishnagar, Kaldanga, Krishnadevpur, it has become very difficult for them to cross 400meter span of the canal known as “Chari Ganga” in boat which remain densely infested by hyacinth throughout the year. The students, teachers, patients and office goers are the most suffered ones as it takes around 2-hours daily to cross the canal.

As the situation remained the same over years, the villagers in last week sent a appeal to chief minister Mamata Banejee requesting her to provide a footbridge over the canal.

“We are tired of making repeated appeals. Nevertheless, as last resort we appealed chief minister after an expectant mother and a snake bite patient died on boat while crossing through the weeds a few months ago”, said Manab Mandal, a resident of Khounishnagar.

“They died in front of us in pain as the boatman failed to move the boat ahead due to hyacinth. We have no health centre here. We have seen many patients died with their family members watching helplessly as taking them to hospital in Santipur during night is just impossible”, Mandal added.

Pritam Das, a first year BA student from Char Panpara village said: “I leave my home at 7-am daily to cross canal to reach Santipur College by 11-am”. Jit Mandal, Riya Mandal, Mou Mandal and about 700 students like them also do the same to attend their school on the other bank of the canal.

The villages have a junior high school and two primary schools, but the schools are often shut down early as most of the teachers who come crossing the canal, are always in a hurry to return before evening descends. A teacher said: “We try to complete classes by 3-pm so that we could cross the canal during daylight”. The postmen never visit the village. They leave letters to the boatman.

Nadia zilla sabhapati Bani Kumar Roy said: “There was earlier a provision for cleaning hyacinth under central aided schemes, but the present government has withdrawn it. We are, however, trying for an alternative arrangement so that the hyacinth can be removed. State fisheries department is being consulted if they undertake a project there which can itself clean the canal”.

“I leave my home at 7-am daily to cross canal to reach Santipur College by 10-am after battling with hyacinth” – Pritam Das, BA 1st year Student

Meanwhile, responding to appeal of Santipur MLA Arindam Bhattacharjee a team of Irrigation and Waterways department conducted a survey and submitted a report to the state government explaining the need of a footbridge over the canal “to bring prosperity in the area and to reduce communication distance”.