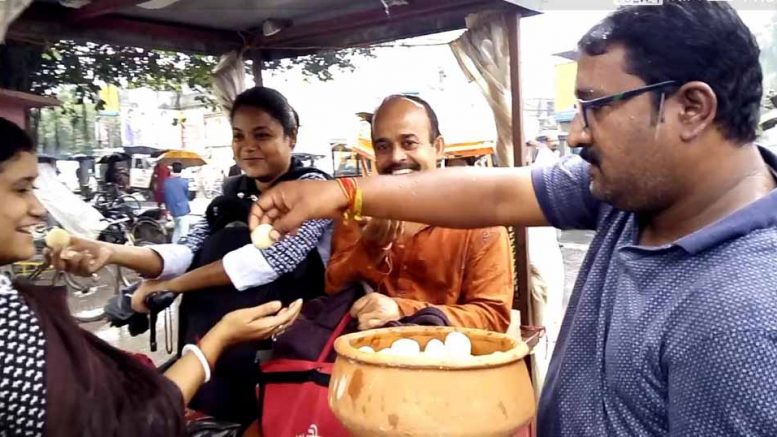 A volunteer distributing Rasogolla among some Toto riders in Ranaghat on Wednesday.

Ranaghat, Nov. 15: People in Ranaghat today celebrated Bengal’s victory over Odhisa on Geographical Indication (GI) tag for Rasogolla. Members of Nadia Swadhinata Dibas Udjapan Committee with the support of Ranaghat Municipality today distributed more than 2000 rosogollas among people in the town. Pedestrians and others got sweet surprises when the volunteers greeted them on the road with “handi” full of syrupy and juicy rasogolla. Ranaghat Municipality chairman Parthasarathi Chatterjee personally took part in the celebrations organized at Ward-10 and distributed the sweet among people.

A beaming Chatterjee said: “The GI tagging for Banglar Rasogolla has made people of Nadia proud as well, because the name of the pioneering maker of this sweet delicacy – Haradhan Moira is associated with Nadia. Haradhan Moira, who invented this unique sweet delicacy was the sweetmaker of Ranaghat’s zamindar Pal Choudhury family. He was a resident of Phulia. We on behalf of the Ranaghat Municipality helped the state government to ensure the claim over Rasogolla by submitting documentary references from history and literature before it submitted its claim to the Controller General of Patents, Designs and Trademarks, which functions under the Union Commerce and Industry ministry.”

Councilor of Ward-10 Kosholdeb Bandopadhaya said: “We submitted copies of old literary articles like ‘Luchi-Tarkari’ written by Kshitimohan Thakur (1901) and article by Panchanan Bandopadhaya (1906) who written that it was Haradhan Moira of Phulia who invented Rasogolla sometimes during 1845-55. The spongy white rasogolla was introduced by Kolkata based Nabin Chandra Das much later during 1868. So this recognition for Rasogolla made us very happy”.

Meanwhile, members of a club in Phulia named as “Junior One Hundred”, have decided to celebrate Rasogolla’s win in a big way. Club’s cultural secretary Abhinaba Basak said that they would make the “biggest” rasogolla on November 19 night. “We have planned to make a rasogolla weighing 12kg using chhana, which will be made throughout the Sunday night in which over 20sweetmakers will work”, Basak said.