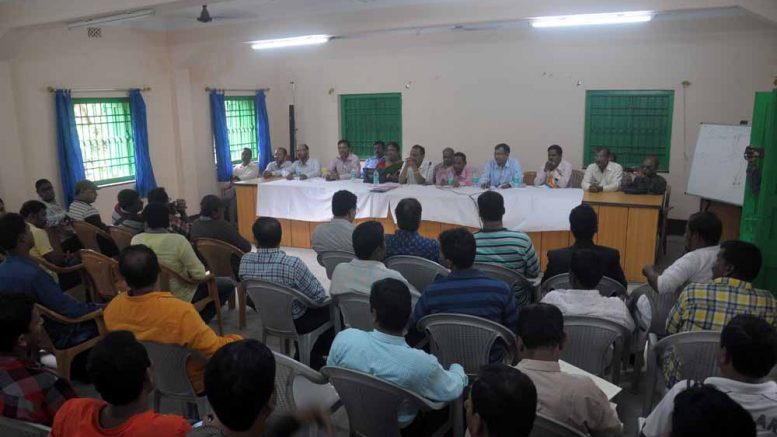 Traders from Bangladesh and India met in Krishnaganj

Krishnaganj, Nov. 17: The traders from Nadia and adjacent Bangladeshi district Chuadanaga today demanded restoration of an abandoned stretch of 3-km road connecting Nadia’s Tungi and Chuadanaga’s Daulatganj which they claimed could come up as a viable alternative route to bring Dhaka closer to Kolkata reducing the road distance by over 100-km between the two cities and provide a fillip to export and import as well between the two countries.

Members of Nadia district chambers of commerce and members of Bangladesh based Daulatganj Clearing and Forwarding Agents as well as Chuadanga District Chambers of Commerce today demanded this after a meeting in Nadia’s Krishnaganj.

A 15 member Bangladeshi team consist of traders and representatives of local administrations of Chuadanaga district today attended the meeting in Nadia’s Krishnaganj convened by members of NDCC, where they adopted a joint resolution to appeal the Governments in New Delhi and Dhaka so that they take up the issue bilaterally.

President of NDCC Kalidas Dutta said: “There was a 3-km road from Majhdia to Tungi on Indo-Bangladesh border connecting Bangladesh’s Daulatganj that was used upto 1971’s Bangladesh war for vehicular movement. But, it was later closed and border function was erected. The traders of either side of the border have been demanding for restoration of this road for long. If this road is restored the present trade route would reduce for over 100-km”.

“There was a 3-km road from Majhdia to Tungi on Indo-Bangladesh border connecting Bangladesh’s Daulatganj that was used upto 1971’s Bangladesh war for vehicular movement. But, it was later closed and border function was erected. We demand restoration of this road “ – Kalidas Dutta (President, NDCC)

Zahangir Alam, chairman of Jeevannagar Municipality in Bangladesh said: “At present traders and visitors from Darshana, Chuadanga undertake journey of 127-km to reach Benapole to go to Calcutta. But, if they come through Daulatganj – Tungi link, the distance would come down to just 35km. The distance would similarly be reduced for the traders who visit to Dhaka through Benapole”.

NDCC president Kalidas Dutta said: “We would submit the joint resolution to the Government of India through the District Magistrate so that it considers reviving the route. Our Bangladeshi counterparts also do the same in their country”.

The traders of the two countries would against held talks with Nadia district magistrate Sumit Gupta on December 29 in Krishnanagar.

DM Sumit Gupta said: “They are most welcome. Earlier the NDCC submitted an appeal which was sent New Delhi for consideration, but nothing has been heard so far from it”