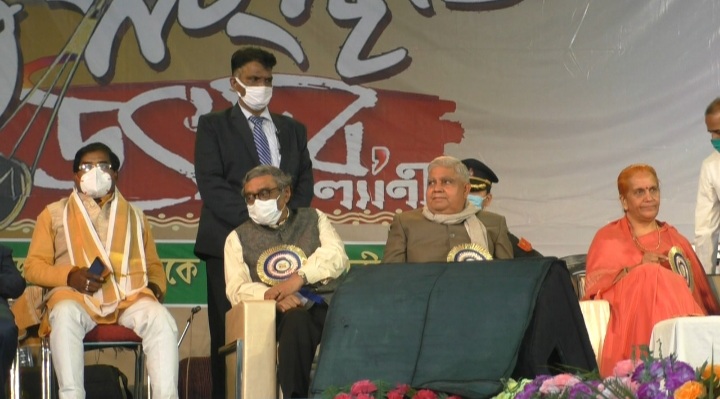 Governor Jagdeep Dhankhar at the inauguration ceremony of Bango Sanskriti Utsav in Kalyani on Friday evening. Picture by Palash Sarkar

Kalyani, Jan. 8: Bengal Governor Jagdeep Dhankhar apparently slammed ruling Trinamul Congress for creating a political debate using ‘outsider’ tag, which the party also trying to make a poll plank in the ensuing assembly election. He said that such tagging is ‘unconstitutional’ as no Indian can be branded as ‘outsider’.

Speaking to the media persons in Nadia’s Kalyni after inaugurating the Bango Sanskriti Utsav on Thursday evening, Dhankhar said that he feels ‘pain’ when countrymen from one part is tagged as ‘outsiders’ in other part.

“It is painful and quite disturbing for me to see when son of mother India from one part is called outsider in other part”, Dhankar said adding that such tagging is against the concept ‘We the People’ as enunciated in the Preamble of the Constitution.

He also referred to Rabindranath Tagore’s renouncement of the Knighthood over the after the Jallianwala Bagh massacre occurred on April 13, 1919. “..Just imagine why the heart of Rabindranath Tagore was hurt when Jallianwala Bagh massacre occurred. It occurred over about 1000 km away (from Bengal), nevertheless, he renounced his Knighthoods”, the Governor told the reporters.

Claiming himself as a custodian of the constituency he said, “For no narrow interest we should do any such thing which harm the basic concept of our constitution”.

Trinamul Congress created the debate over the issue tagging the non Bengali BJP leaders as ‘outsiders’ who have been visiting Bengal as part of party’s campaigning strategy. In an apparent articulation Trinamul has been trying to isolate ‘non-Bengali’ BJP leaders from people in the state claiming that such ‘outsiders’ have little understanding of Bengal’s culture, but being used by the party only to win the election. The strategy adopted by Trinamul following repeated visits of heavyweight BJP leaders that include home minister Amit Shah, BJP National President JP Nadda, Kailash Vijaybargiya and a battery of other leaders who have been travelling as part of party’s public outreach programme – ‘Griha Sampark Abhiyan’

The BJP has also made a counter attack raising question about the issue. Union Minister of State for Finance Anurag Thakur on Monday slammed asking the ruling Trinamul what makes an Indian citizen to be ‘eligible’ as insider. “If a Union minister is termed as an outsider in West Bengal, then people from which place are considered as insiders”, he said.

Trinamul leadership, off late, apparently realised that ‘outsider’ debate could convey a wrong message to the people of non-Bengali communities living in the state and compelled to undertake a damage control initiative.

The damage control initiative became obvious on Wednesday when Chief Minister Mamata Banerjee told industrialists that she always considers Rajasthani, Gujarati and people from other parts of the country living in Bengal for long as the ‘son of the soil. She also vehemently tried to make it clear that the ‘outsider’ tag is not to mean them rather it is aimed for political parachutists. During an interaction with the industrialists in Kolkata she said, “I don’t call you outsiders…. People who visit Bengal before the polls, I call them outsiders”.

Governor Dhankhar reiterated that such tagging on people from other part of the country is unfortunate and against the Principles and objectives of constitution.

Reiterating his concern for constitutional obligations the Governor ruled out any ‘interest’ in state politics. “I don’t have any interest in politics. I am not even a stake holder in politics. I am not concerned even with political outcome. But, I am a stake holder in Governance. My concept of governance that is we must confined to the constitutional limits, we must follow the rule of law”. He also urged people to change the tradition of bloodshed in the ensuing assembly poll and urged government employees to act neutrally during the poll making the New Year 2021 as a ‘turning point’ for the state.