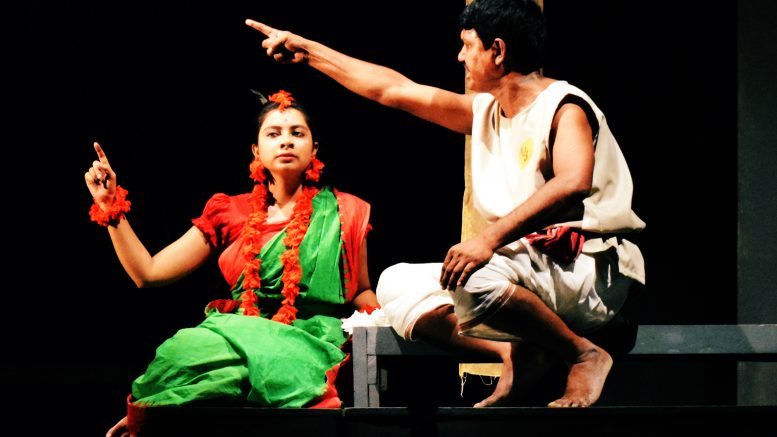 A scene from 'Raktakarabi' staged by the inmates in Krishnanagar

Krishnanagar, June 22: A group of 18 inmates of Nadia district correctional home came together on Saturday to stage Tagore’s play ‘Raktakarabi’ in Krishnagar in their endeavor to get new lease of life in their monotonous world behind the bar.

Nine month’s rigorous efforts in the form of rehearsals paid off when they enacted the play under ‘Theatre as Therapy’ programme of Ramakrishna Mission Saradapith with support of state government’s Directorate of Correctional Services who engaged Krishnagar based theatre group ‘Sinchan’ to produce the play.

15 convicted inmates and 3 under trials under the tutelage of director Susanta Kumar Halder performed before a packed house audience at Rabindra Bhawan in Krishnagar for the first time being released for a day for the show on parole. The female characters were, however, played by guest artistes.

‘Sinchan’ began a project under ‘Theatre as Therapy’ programme with the inmates of District Correctional Home four years ago and the Saturday show was their first major public appearance.

“We just tried to project theatre as ‘home’ to them so that they feel free and open their mind without hesitation. None of these 18 inmates was ever involved in any medium of performing art. But, we tried to inject this art in their minds and helped to explore it naturally”, said play director Susanta Kumar Halder of Sinchan.

“Our objective was not just to involve them into theatre rather inject natural qualities like patience, compassion, friendship in their character. They suffered for their past. But, we tried to heal up their sufferings through lessons of theatres. In this endeavor ‘Raktakarabi’ provided great help as this play of Tagore shows the ray of hope breaking the web of shackles”, Halder added.

Ujjwal Biswas, the minister in charge of the department of correctional administration said, “Raktakarabi speaks about freedom. We also tried to inject this feeling of freedom among the inmates. The lively performance of the inmates shows that they involved themselves by heart”.

The Bengal government introduced theatre inside the prison during 2005. Former Inspector General of Prisons B.D.Sharma launched ‘culture therapy’ for the inmates with engaging a theatre group at Murshidabad district correctional home

An officer of Nadia district correctional home said, “There are so many programmes introduce to bring a change among inmates. But, the theatre has indeed changed their lives mostly. It has also made them desperate to make amends for their past mistakes and make a new beginning”.

For the 18 inmates ‘Sinchan’ organized two hours rigorous workshop thrice a week since October last year. “It became the most fascinating hours of the day to them. They used to wait eagerly for the rehearsal days as it provided them the freedom, the ray of new life. The lesson of life they learnt from theatre would definitely heal up their mind and make them transformed persons”, director Halder said.