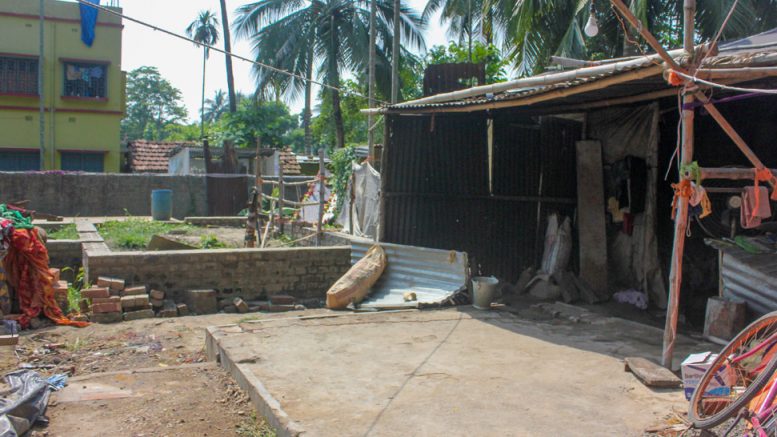 Santipur, June 20: On the day chief minister Mamata Banerjee asked party councilors to refund the cut money, which many of them taken from beneficiaries of government schemes, a decorator worker in Nadia’s Santipur has lodged a police complaint against a lady councilor of local civic body and her party activist husband allegedly for taking Rupees twenty seven thousand in two installments to ensure smooth release of funds for building a home he was allotted under Prime Minister’s housing scheme.

Paresh Sarkar, 45, of Lebutala para lane has appealed police to help him so that the money he paid to the lady councilor of ward 15 Soma Ganguly and her husband Sukanta is refunded.

Police, however, yet to start a case as an officer of Santipur police station said that the ‘veracity’ of the complaint being examined.

Mamata Banerjee on Tuesday during a meeting with councilors of civic body under control of her party had advised to refund cut money they have taken from beneficiaries of government’s welfare schemes since it created a blot on party’s people friendly image. Paresh in front of his tarpaulin shed

Earlier this month she also had announced a grievance cell and a toll-free number to deal with complaints of irregularities and corruption in delivery of welfare schemes being implemented by her government.

Both the announcements are construed as an oblique admission by the ruling establishment that some beneficiaries of the schemes may have had to pay Trinamul Congress leaders and officials to avail themselves of benefits.

In Santipur, the poor decorator worker has accused the party councilor and her husband of taking Rupees fifteen thousand in first installment after allotment notification was issued for smooth release of fund and later to get a blockade clear when release of fund suspended by Municipality for constructing excess area beyond approved plan.

Sarkar alleged that despite taking money the councilor and her husband done nothing for him even after release of fund suspended and he has been compelled to live under a tarpaulin shed for about past three months.

Councilor Soma Ganguly and her husband refuted allegations. “The allegations are baseless and aimed to malign us”, Soma said.

Municipality chairman Ajoy De said, “The Municipality being the disbursing authority directly deposits the fund to beneficiary’s bank account so that they could own execute the work as per plan. But, if any beneficiary bribes anybody the municipality has nothing to do. Moreover, the beneficiary has lodged no such complain with us”.

Municipality sources said, Paresh Sarkar during 2017 was allotted a home under Pradhan Mantri Awas Yojona (PMAY). As per the scheme a beneficiary get Rupees 3.53lakh for building his home as per pre-approved plan. The amount is released to his bank account in four phases of construction after physical verification and utilization certificate issued by engineers of the disbursing authority.

For Paresh the municipality paid him Rupees fifty-five thousand in first phase for foundation work so far only.

Payment of second phase  not paid after Municipality’s engineer raised objection for building around 6 square ft area beyond approved plan.

Paresh said, “It was a mistake on my part. The engineer advised me to demolish extra part. But, the councilor and her husband took Rupees twelve thousand assuring to settle the matter. They also earlier took Rupees fifteen thousand assuring to settle any problem if cropped up and assured smooth release of fund. The councilor said it is for her I was allotted the home under the scheme. But, they eventually done nothing and the work stopped”.

“I later appealed the municipality to reconsider my case and to release fund, but no payment released so far, whereas the councilor putting pressure for more money”, he alleged further.

Sukanta Ganguly, husband of councilor Soma said, “We have neither taken money nor assured any undue support. The allegations are baseless. The work was stopped because the beneficiary executed extra work and asked to make it as per plan. But he did not rectify it and no further fund was released. I have no role here…”.

But Paresh and his wife Rupali blamed that the councilor and her husband lying. “Sukanta on many occasions came and  insisted for payment and took money in at least two occasions“.