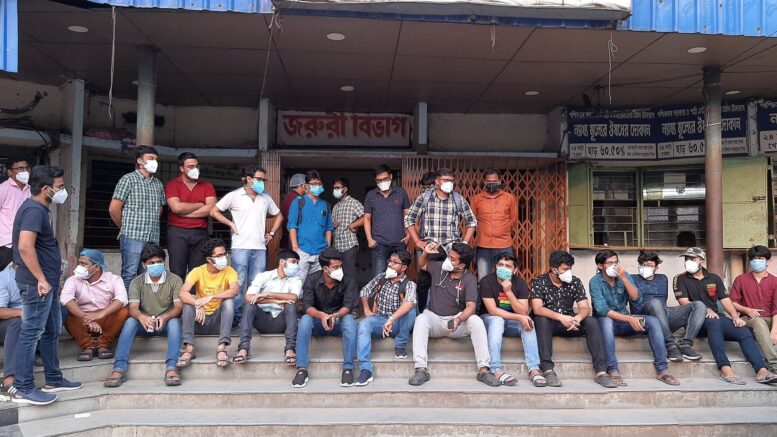 Kalyani, May  7: The interns attached to Kalyani based College of Medicine & JNM Hospital demonstrated at the emergency section accusing the authorities for negligence following oxygen cylinders at the 1000 bed medical college hospital ran out of stock creating a panic among the patients and their relatives.

College of Medicine & JNM Hospital is one of the largest medical college hospital in South Bengal with multi care support facilities. The hospital has recently augmented 100 beds to make an Covid unit following fresh spike in the Covid positive cases.

The interns alleged that that oxygen cylinders went out of stock at around 12 noon on Thursday. But the hospital authorities did not bother to ensure its arrangement to meet the emergency requirement where 80% of the patients admitted with breathing troubles.

Sources said that Domjur based suppliers of the cylinders failed to supply any cylinder during the past three days due to the ongoing crisis. Nevertheless, the hospital authority did not make any temporary arrangement of oxygen. On Thursday evening the supplier agreed to send a consignment, which would reach the hospital around midnight.

“There is a crisis of oxygen across the country. But, it is unimaginable that a medical college has no stock of oxygen and the medical superintendent did not take action despite our repeated appeal. We were later told cylinders would be coming late at night which means the patient would remain without oxygen for about 12 hours in the hospital when anybody can die”.

“We told the Medical superintendent to ensure stock of oxygen from alternative sources. But, he did not respond, rather misbehaved with us and refused to talk”, an intern, who joined the demonstration said.

The interns claimed that during the past few days no patient could be provided with required quantity of oxygen due to lack of stock, which led to death of some patients also. “Many persons died during the past few days in the hospital only because they were not provided with the oxygen support. If this continues, more patients would die here”, an intern added further.