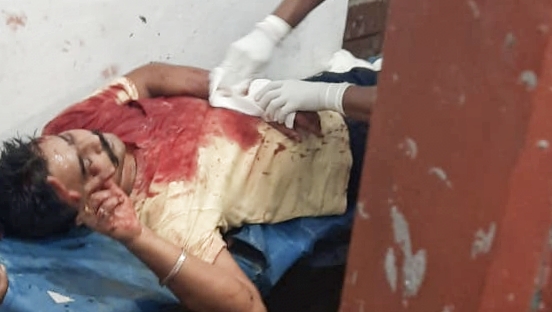 Chapra (Nadia), June 9: Barely two days after a sub-inspector of police was shot at by miscreants in Liluah of Howrah; a constable in Nadia’s Chapra suffered multiple bullet injuries when he was shot at from close range by unidentified miscreants on Wednesday night.

Niloy Biswas, 30, attached to the DIG office in Barrackpore, was walking with his wife Shilpa along the Krishnagar-Karimpur state highway in Baro-Andulia of Chapra, when the miscreants attacked him. The incident occurred at about 9.30 pm.

The constable, a resident of Radhanagar village in Palashipara of Nadia, came to his in-laws’ house in Baro-Andulia under Chapra police station to attend a shraddh ceremony.

Local sources said that the miscreants fired at least four rounds of which two hit the constable on his shoulder and left hand. Hearing the gun shots, some employees of a local fuel station rushed in to rescue the couple and called police.

Biswas was rushed to Chapra block hospital, but soon shifted to Nadia district hospital in Krishnagar in a critical condition.

Victim’s wife Shilpa Biswas said, “We were walking along the road when two youths on a motorcycle blocked our way and began beating us. My husband tried to introduce himself as a policeman, when one of the miscreants asked the other to open fire. My husband tried to resist the youth carrying the fire arm. But, he fired fast from close range and fled in the dark”. Chapra police have began an investigation and questioning the wife of the constable