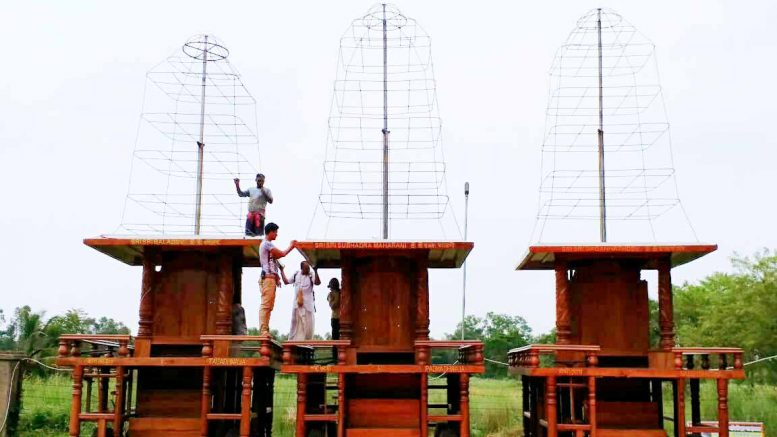 The chariots being prepared in ISKCON Mayapur

Mayapur, July 9: The Iskcon authorities in Mayapur would organise a carnival on the occasion of Rath Yatra festival during July 14 to 22. The carnival will be organised close to the ground of Sri Prabhupad ghat in Mayapur where the Iskcon authority would construct a grand ‘Gundicha’ temple that looks quite similar to Lord Jagannath temple of Puri, a spokesperson of Iskcon said on Monday. “The festival will be celebrated in great way. A carnival is being setup around the Gundicha temple where Prasad stalls, games; roller coaster rides will be available for devotees and visitors. Local and international devotees will perform keertans and bhajans round the clock during the period”, the spokesperson added.

The Iskcon authorities expect over one lakh footfalls on the inaugural day of the festival on July 14, when Justice Sambuddha Chakraborty of Calcutta High Court will grace the venue as this year’s chief guest. The chariots being prepared for the festival

The festival commemorates the annual journey of Lord Jagannath, Lord Baladev, and their sister Subhadra to their aunt’s place, the Gundicha Temple. It is believed that anyone who gets the opportunity to pull their carts on way is bestowed with the benediction of cleansing the sins he may have committed.

ISKCON authorities began celebration of Rath Yatra in San Francisco in the year 1967 by HDG A.C. Bhaktivedanta Swami Srila Prabhupada, founder of the organization.  It is currently being organised in all the 700 centres across the world.

The most unique feature of Rath Yatra in Mayapur is that it has become a symbol of communal harmony. For years it has been a practice people irrespective of their religious faith and identities turn up in large numbers to get a glance of Lord Jagannath.

Meanwhile, the preparations and planning for the festival are going on at the Iskcon hub in Mayapur. A spokesperson of Iskcon said, “At present more than 100 devotees have been toiling night and day to complete the preparations. The carts are being prepared with colorful clothes, flowers, garlands, flags, lamps”.  On the afternoon on July 14, the three deities will be carried into their respective carts – Taladwaja of Lord Baladev, Devadanala of Subhadra Devi and Nandighosa of Lord Jagannath.