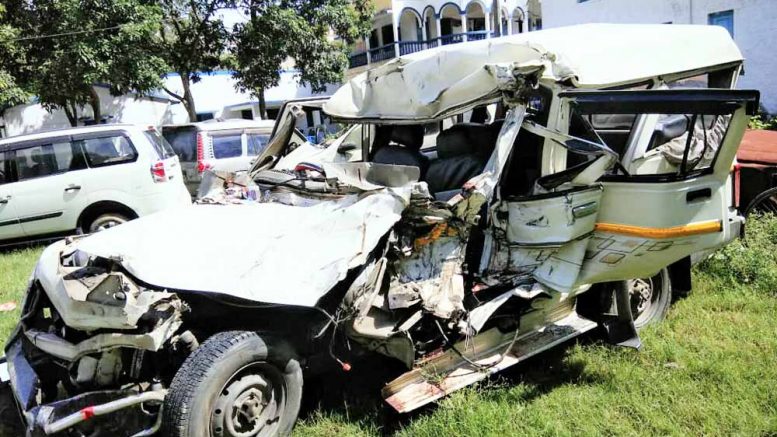 Bethuadahari, July 9: A sub inspector and a constable of North Dinajpur district police were killed and another constable was critically injured when the Mahindra Bolero they were travelling in had hit a stationary truck laden with stone on NH-34 in Nadia’s Nakashipara on Monday morning after the driver had allegedly dozed off.

The driver, a hired worker, also died in the accident that occurred in Gacha village near Bethuadahari town at about 5 in the morning.

All the police officials were attached to Raiganj police station, who were going to Calcutta on an official assignment. They left from Raiganj on Sunday night.

The deceased police officials, who were in their early forties, identified as sub inspector Mohammed Masud, Constable Tarun Kumar Das and driver of the ill fated vehicle Provash Mahato.

Farmers going to market early in the morning, who witnessed the incident claimed that the while Bolero had zigzagged on the NH34 for about 200 metre before it crashed into the stationary track.

A patrolling vehicle of Nakashipara police station rescued four victims from the mangled remains of the vehicle and took them to Bethuadahari block hospital, where three pronounced dead, whereas the remaining one transferred to Saktinagar district hospital in Krishnagar.

An officer of Nakashipara police station said, “After preliminary investigation it appears that the driver of the vehicle was most probably fell asleep due to tiring night long journey. Some local villagers who were on the road at the time had also seen the vehicle was running fast in zig zag way and eventually rammed into the back of a parked lorry. However, we are waiting to know what exactly happened from the injured constable who is now admitted to hospital”.

Meanwhile, doctors at Saktinagar hospital where Constable Satyabrata Basak is admitted said that he remained ‘unconscious’ and in a ‘critical’ state.

North Dinajpur’s Superintendent of Police Anoop Jaiswal said, “I am very shocked to hear about their accident. They left from Raiganj on Sunday night to attend an official meeting in Calcutta scheduled for Monday morning. I don’t know how they met with the accident. I have requested the Nadia police to make necessary inquiry into the accident”.

A doctor at the Bethuadahari hospital said, “All the victims had multiple fatal injuries particularly on their head, face and chest. It appears that the victims were asleep when the accident occurred”.

Nakashipara police has started a case of unnatural death.