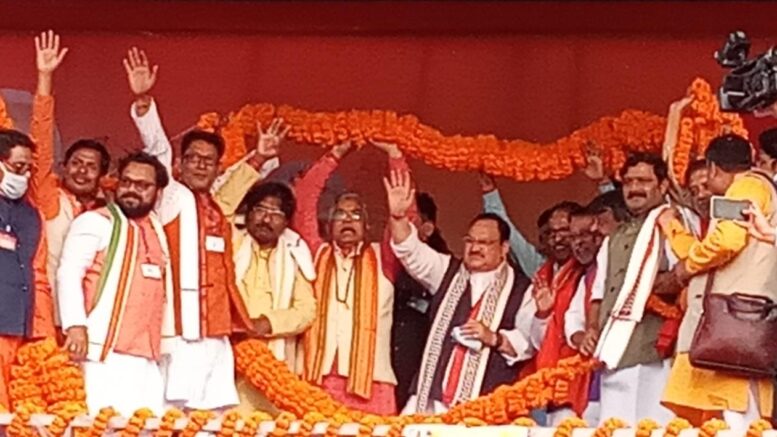 Nabadwip: BJP president J.P.Nadda kicked off the “Parivartan Yatra”, a state wide campaign at Nadia’s Nabadwip on Saturday promising to bring a change in rule in Bengal while accusing Trinamul for its failure and corruption.
Addressing a rally in the Vaishnab hub of Nabadwip to mark the launching of the Yatra, which would simultaneously go from five zone to cover all 294 assembly segments, Nadda said that campaign would not just bring change in the rule rather in the though of the people.
“Ten years ago Mamata di formed a government promising a change and to protect Maa Mati Manush. But eventually, Maa was looted, Mati was disrespected while the people suffered heavily”, Nadda alleged accusing the Trinamul chief for depriving people in state from availing the benefits of the central scheme.
Lashing on Mamata Nadda said that it is only because of her “ego” she is not implementing centre sponsored welfare schemes like farmers cash benefit scheme PM Kisan Samman Nidhi, health insurance scheme Ayushman Bharat.
“Nearly 23 lakh farmers have submitted application to avail the benefit of PM kisan samman scheme. But Mamata Didi stopped the verification of their application only due to her ego…”, Nadda alleged.
“Prime minister Modiji has been trying to provide everything to people of Bengal. But she does not want…she says Chai  na..Chai na”, Nadda alleged while further accusing Mamata Banerjee for hijacking central government schemes and implementing those by changing tgeir names for political benefits.
“She has renamed the Nirmal Bharat Abhiyan as Nirmal Bangla mission, launched Bangla gram Sadak Yojona renaming the Pradhan Mantri Sadak Yojoana…”, Nadda said accusing the Bengal chief minister for preferring politics over development.
Claiming that BJP would form the next government Nadda said that all the centra scheme will be implemented after May this year. “Nothing can prevent BJP to form.the next government when all central schemes blocked by Mamata would be implemented…I can see people in Bengal made up their mind to end Mamata and her Bhaipo’s rule”, he said.
Share the news
SHARE TWEET PIN SHARE