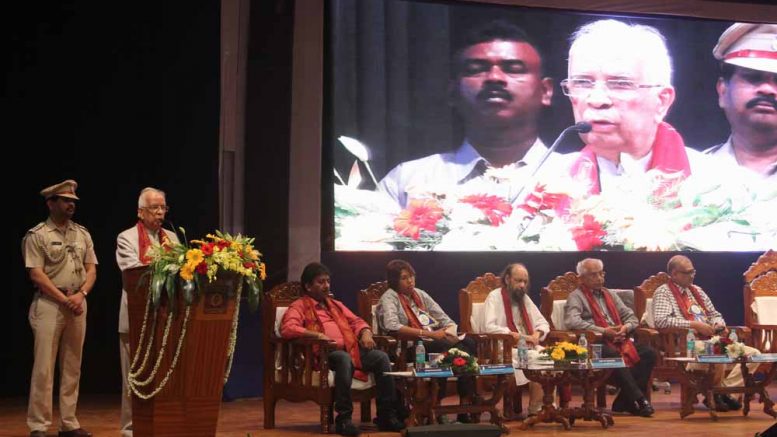 Kalyani, Sept. 7: Ace all-rounder of Indian women’s cricket team Jhulan Goswami, eminent vocalist Ustad Rashid Khan and Bengali poet Joy Goswami were conferred upon the honorary D Litt (Doctor of Letters) by the Kalyani University today as recognition for contribution in their respective fields of works. The honor which includes a shawl, a citation and a memento were handed over to the recipients by the chancellor and state Governor Kesharinath Tripathy on the occasion of 28th convocation of the University. and endowment certificates. Altogether 93,672 degrees and certificates were given to students for the years 2015 and 2016 at the convocation.

Receiving the honor an elated Jhulan Goswami said: “Cricket is my passion. I am in love with cricket since childhood. So I studied little. My only agenda was to keep away from study. Despite that today I am honored by an institution like Kalyani University, which I have never dreamt or expected. This is a very proud moment in my life. I feel extremely honored and touched today. This honor is really different to me. I have received many accolades and honors like Arjuna, Padmashree, ICC awards but never felt so much excited.” Expressing his gratitude Sahitya Academy award winning poet Joy Goswami said: ‘My poems are expressions of a lonely mind. It is a great honor that the University authorities considered my name. I would be happy enough to write and express what I feel till the end of my life”

Receiving the honorary D Litt eminent vocalist Pandit Rashid Khan requested the Kalyani University authorities to open a branch of learning Hindustani classing music at the University. “Music is like a devotion to many like me. I would appeal the university to consider opening a branch for learning music. Because this is our well treasured pride which we should nurture and learn”, said the music maestro in reply to conferment of the honor.