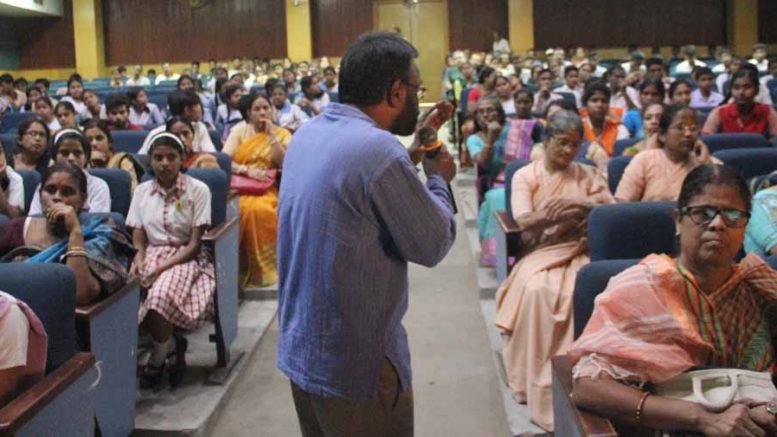 An awareness poster at the venue of workshop

Krishnanagar, Sept. 8: Make your time, build a “home” that share and cares to change life. That is the call from the mental health advocates for the parents to save their children before they end their lives feeling low. This message was communicated to over 500 parents who gathered at an interactive workshop today on ‘prevention of suicide among adolescent children’  in Nadia’s Krishnanagar.

In a bid to aware the parents and the children as well to find out a way for combating the increasing tendencies of suicides among the adolescent children, the Nadia district administration in association with UFlourish Counseling Foundation, a mental health initiative of Catholic Church, Krishnanagar organized the workshop.

Around 500 students from 24 schools in and around Krishnanagar took part in the workshop along with their parents today.

Nadia administration has decided to include the initiative to Sarvasiksha Mission.

“We would organize similar workshop in other places of the district soon under the mission to develop awareness”, said Sachchidananda Bandyopadhayay, District Project Officer of Sarvasiksha Mission.

“It is high time the parents need to share valued time with their children at home. A friendly interaction, a jovial chat, friendly pat on their back for their good works can encourage them and will not just help them to get rid of anxieties but at the same time can make a home good enough for living if the children feel low”, said father Jose Pulickal, a counseling psychologist and Director of UFlourish Counseling Foundation, who interacted with the parents and children.

“Try to understand them and if your find something unusual and not quite right – that is the time to have the conversation with your children, because, a suicidal tendency does not develop instantly. The parents should learn to identify the symptoms”, Father Pullickal said. The counselors made video and graphical presentation to for a clear understanding of the mental state and symptoms of a possible suicidal tendency in the workshop.

“The problem of suicide is increasing and it has to do with changing socio-economic scenario of the families” opined Sachchidananda Bandyopadhayay, DPO of Sarvasiksha Mission.

“Generally a child who is in distress never asks for help. But, we have to find out his problem. We have to ask him ‘are you ok?’ There is great power in the parents to offer help which no other person can offer”, he added.

According to the National Crime Report Bureau (NCRB) report for 2015, every hour, one student commits suicide in India. 8934 students committed suicide in 2015. In the five years leading to 2015, 39,775 students killed themselves. However, the actual figures may stay higher if one adds up the unreported cases of suicide. Going by the 2012 Lancet report, India has the highest rate of suicide in the age group of 15-29 in the world.

The situation of West Bengal is increasingly becoming grim. In 2015, among 133623 persons committed suicide in India of which 14602 persons are from West Bengal placing the state in top 5 of the chart. Rate of suicides per lakh population in West Bengal was 15.5 per cent, while the national average was 10.6 per cent. Due to the stigma attached to suicide, many deaths go unreported.

“Anxiety is the most common problem that students face these days. They are faced with severe competition and the increasing demand of performing well in their studies. Failure is seen catastrophic and severely affects their confidence”, said Father Jose Pullickal.

“Our objective is to make the parents aware and to begin a learning process for them. The workshop would provide an opportunity for community and school representatives to gain knowledge and skill in planning a community approach to prevent suicide among the children”. –  Father J Pullickal.

Anita Yadav, mother of class 9 student of Akshay Vidyapith said: “This is a great initiative. This is very important that as parents we need to understand, gain knowledge and to deal with suicidal behaviors in our children. The workshop would help us to suggest frameworks for a domestic and community based suicide prevention methods”.