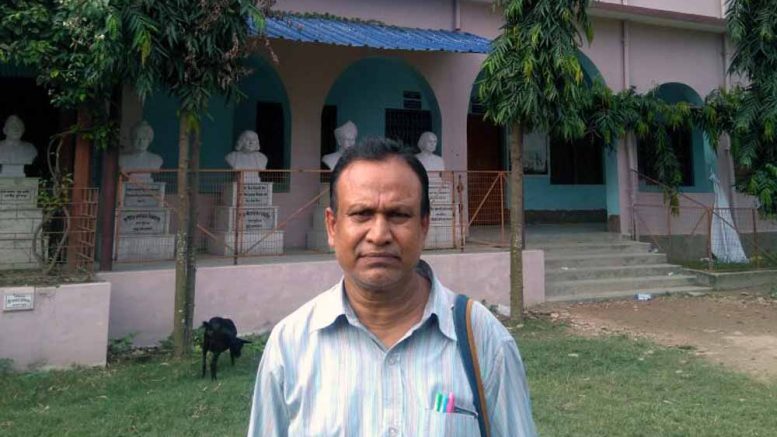 Majhdia, Sept. 5: On a day when the country was paying tributes to the teachers, a retired school teacher in Nadia’s Majhdia was allegedly abused and shown the door at his own workplace by its head master who refused to issue him a ‘No liability’ certificate required for release of pension because he could not pay Rupees ten thousand as subscription for organizing school’s 150th anniversary in January this year.

A “No Liability” certificate ensures no due to incumbent, which required to be submitted to treasury for release of pension after issue of Pension Payment Order (PPO). The retired teachers’s PPO was issued by state government in July.

Sunil Majhi (61) of Bagula, a former sanskrit teacher of Majhdia Railbazar High school, who retired on January 31 this year was today eventually accused of disrupting normal functioning of the school by the headmaster Ratan Mandal, when he came to school to obtain a “no liability’ certificate from him. Mandal, however, blatantly refused to oblige and eventually lodged complaint against Majhi and his two companions at Krishnaganj police station of snatching a bag containing Rupees 65000.

Some students, who watched Mandal throwing the bag on the road in front of school, recovered it and handed it over to the police. But, no cash was found inside the bag, police officials said.

Majhi’s son Sayakk, meanwhile, lodged a complaint at the Krishnaganj police station accusing the head master of unleashing mental torture on his father and for harassment. (GDE No.176)

The incident irked the students of the school, who staged demonstration against Mandal who escaped from the school suspending the scheduled celebration of teachers’ day. The students become so angry that police rushed to the school and pacify them assuring to look into the matter.

Trouble began for teacher Sunil Majhi during January this year when Mandal and some other teachers demanded subscription of Rupees ten thousand for school’s anniversary celebration.

Majhi said: “I told them that as I would retire by end of January it would be difficult for me to pay the amount. I, however, assured them to pay my contribution once my pension would be released. But the head teacher and some of his aides insisted me to pay the subscription immediately which I refused to oblige. But, I never imagined that it could land me in such trouble”.

Majhi alleged that once the school’s anniversary celebration was over, head teacher Mandal started harassment by delaying to submit the pension documents.

“He intentionally delayed the submission and further made such unimaginable mistakes for which the pension documents returned for clarification on a number of occasions”, Majhi added.

However, during July the state government issued the pension payment order (PPO) in favor of Majhi and asked him to get a ‘no liability’ certificate for release of pension to bank. But, Mandal refused to issue the certificate unless the subscription of Rs. 10000 for 150 year anniversary celebration is paid.

“Since July I have been visiting the school to get the certificate, written letters for it. But in all the occasions Mandal refused to comply. He did not even bother to realise that how a retired person could survive without pension. On Monday I came to school to request him. But he refused. Today I came again to school for the certificate. But, he abused me and left the school early”, the retired teacher said.

Headmaster Ratan Mandal, however, refused the allegation. He said: “The issue of ‘no liability’ certificate being delayed because the DI office made no clarification about an unapproved medical leave of Majhi for 72 days. I asked him to wait until the clarification is received. But he created a brawl inside the school, abused me and also tried to assault me physically before snatching my bag”.

An official at the directorate of education department in Kolkata said: “The Pension Payment Order is issued after service verification. So when the PPO has been issued there is no question of any further clarification. However, if any mistakes are found in calculation of pension and the incumbent is paid excess than actual due, the same may be recovered later”.

An officer of Krishnaganj police station said: “Today’s incident is very unfortunate which the headmaster could easily avoid. We have received two complaints. One from Majhi’s son and the other from the head master. We have summoned the either side tomorrow for a hearing after which the legal action will be considered”.