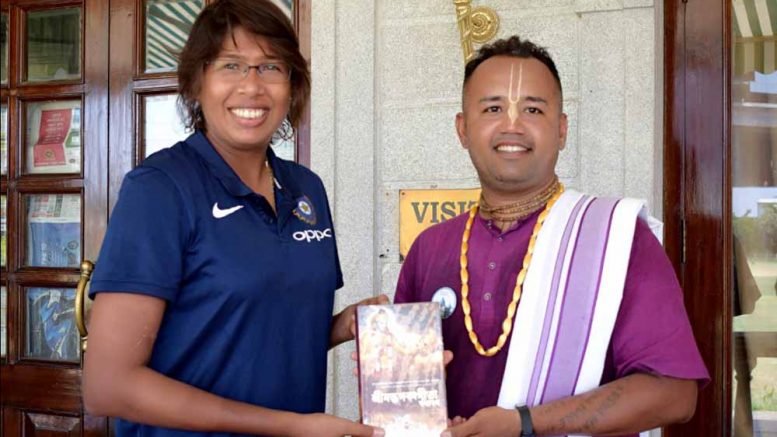 Mayapur, Nov. 27: International Society for Krishna Consciousness (Iskcon) has launched its annual book distribution programme, titled ‘Book Distribution Marathon’  early this month. The programme is being carried away by all the major centres of the organisation across the world during November and December. Subroto Das, a spokesperson of Iskcon in Mayapur said, “Thousands of devotees of ISKCON in Mayapur and in other major centres have been toiling hard to make the book distribution programme a grand success. During this Marathon, sacred books are distributed to senior politicians, bureaucrats, sportsperson, film stars and other celebrities apart from common people. This time copies of Bhagwat Gita were presented to Indian cricket team captain Virat Kohli and women cricket sensation Jhulan Goswami. Jhulan was extremely delighted to receive a Bengali translated copy”.

Speaking to newsfromnadia.in Das further said, “Hare Krishna mantra has become a way of like and also become a movement across the world. To spread the mantra ancient Vedic literature and books on  spiritual topics those touched lives of millions  and become driving spirit in lives of many people are distributed systematically all over the world during this two months”.

Meanwhile, after receiving a copy of Bhagwat Gita in London last week, former Indian women’s cricket team skipper Jhulan Goswas appeared to be elated. She said, “This is for the first time I received a full version of Bhagwat Gita in Bengali language. I know this holy book defines the way of life. I feel blessed a to have it today”.