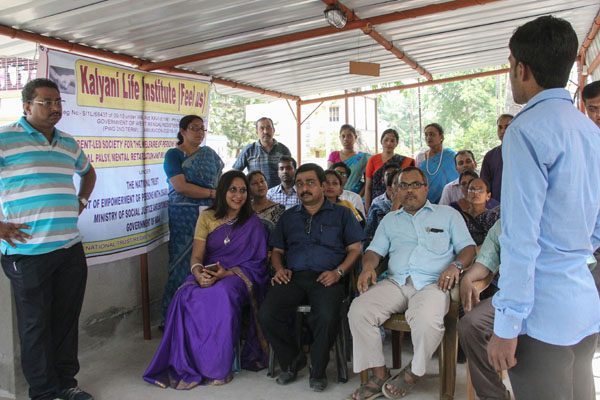 Kalyani, April 10: Manoranjan Sarkar (50), a retired subedar from Barrackpur laments that his son Ankit (12) could be in a better situation now if he could understand that the ‘attention deficit’ in him was an early indication of autism.

Kajal Biswas (45), a primary school teacher from Kalyani also could never imagine that speech disorder in her son Soumyajit (13) was an impact of repeated convulsion during a high fever.

Like Manoranjan and Kajal most parents take long time to understand that their children have autism. But this delay in understanding unknowingly worsens their children’s situation.

As the parents often fail to understand that certain symptoms in early age of their children are indications of autism which, they also fail to manage subsequently, a parents’ support group  of autistic children in Kalyani have come up to sensitize couples and individuals about the early indications of the disease.

The parents’ support group – Kalyani Life Institute, accredited by the National Trust for the Welfare of Persons with Autism, Cerebral Palsy, Mental Retardation and Multiple Disabilities, a trust under union Ministry of social justice and welfare, has launched this initiative from Sunday.

‘Autism’ is a mental disorder that develops in early childhood and characterized by difficulties in communication and other behavior. This is caused due genetic problem triggered by environment as a result lack of supply of oxygen in some parts of the brain that develops after three years of birth.

The common symptoms of these problems are less eye contact, repetitive and restricted behavior, hyper activity, speech disorder and many others.

Secretary of KLI Siddhartha Sankar Mukhopadhyay, a WBCS officer, who has an autistic daughter, said: “This is a sustainable awareness programme for couples and individuals aimed to understand early indication of autism and its required management. Our objective is to aware people so they could educate society as a whole”.

“Being the parents of autistic children we would like to share our experience with other couples and individual so that they became careful. Every autistic kid suffers from different autism spectrum disorder (ASD) symptoms. Generally the problems fall into three areas: social impairment; communication difficulties and repetitive behaviors. We will try to make the people understand its early symptoms”, said KLI president AK Prasad, a doctor with Eastern Railway.

The awareness programme will be held everyday by the parents, special teacher at the KLI rented premise.

Manoj Pramanik, a special teacher, said: “Due to lack of awareness many parents often ignore some early basic symptoms in their child. If a baby’s neck is not stiffened by 3months, or cannot seat by 6months or cannot walk by 12months, or not bubbling audible words, the parents should consult doctor. The early symptoms of autism come clear by 2 years of age. So an early identification of the problem could be immensely helpful for early intervention of parental management, which is very important for the children”.

Subhendu Moulick, an occupational therapist, guided couples said: “As early detection is required to be followed by early intervention to the problem mostly at home, the awareness among parents is very important. This early intervention is actually a parental management plan for children which look into the child’s personal, social, occupational, recreational and academic aspects. Autism is not curable so far, but a proper management can help the child to become independent gradually”.

Subedar Manoranjan Sarkar said: “We noticed some unusualness in my son but never realized that it could be so fatal. The ignorance led to delay in his management”.

Pradip Kumar Mohanty, a surgeon with JNM hospital in Kalyani, who is also father of an autistic boy said: “Such awareness is very important due to lack initiative for this at the government level. Parents for their lack of knowledge often unknowingly damage prospect of their children. Moreover, such awareness drive will educate society leaving prejudices about the disease”