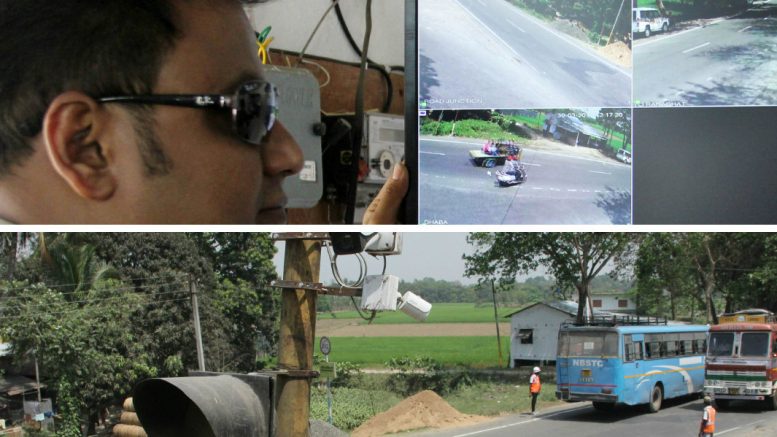 CCTV camera attached to a signal post on NH34 and police watching a CCTV monitor.

Krishnanagar, April 14: In an attempt to minimize the possibility of accidents and criminal activities on the 120km stretch of National Highway that has passed through the district, the Nadia police have installed 130 close circuit television (CCTV) cameras at different vulnerable points. The busy stretch of the NH34 between Jagulia and Kaliganj that connects North Bengal and Calcutta in either end, now being be monitored round the clock by police personnel from 26 control units on criminal activities and particularly on the errant drivers, who have become a cause of concern to the police administration for alarming trend of road accidents.

Simultaneously the district police have setup four speed curbing Naka points on NH34 under four police stations (Chakdaha, Santipur, Nakashipara and Kaliganj) where occurrences rate of accidents are higher. Police have put up three caution marks for the drivers at three break points with clear display at a gap of 500meter ahead of the actual Naka location in either end. The aim is to reduce the speed of the vehicles and to examine the drivers with breath analyzer.

As a consequence of such monitoring that has been started barely ten days ago, no accidents occurred during this period while 396 errant drivers were booked by the police under traffic act who were either penalized or even arrested.

Similar surveillance is also being mooted for the 90km stretch from Krishnanagar and Karimpur, where rate of accidents are quite high.

The district police have also installed head on CCTV camera on its two patrolling vehicles so that it could record live images while on go.

While the state government in last had instructed the district police authorities to identify accident prone spots on highways and other important ways for installation of CCTV cameras, the Nadia district come up as the first one to do the job prior to the instruction. The state government order was issued in last week following 19 persons were died in four days on Durgapur Expressway in Burdwan district.

Nadia police chief Sheesh Ram Jhanjharia said: “Our aim is firstly to reduce the possibility of accident and at the same time to thwart any type of criminal activities on the NH34. We have planned some measures to curb these problems and installations of CCTV cameras are one of them. This is a sustainable initiative and success of it also depends on the awareness of the drivers and common people. We would be monitoring the identified accident prone locations round the clock and take strong legal action for any type of violation”.

Accident on NH34 almost at regular interval with large number of deaths has become a matter of concern to the district police.

An officer said: “From first week of February to first week of March at least 30 deaths were reported due to road accidents across the district. Most of these accidents were occurred due to over speeding reckless driving”.

“However, since the CCTV surveillance started from middle of March no accident was occurred on the NH34. Several errant drivers were booked during the time. All out efforts have been taken up to ensure safety of life”, the officer added.

An officer of district traffic cell said: “Earlier it was very difficult to identify vehicle after accident as it usually flee. But, now such vehicle could easily be traced out as their images will be with us”.

Insiders at the district police administration said that a research team of the district police identified the vulnerable spots after analyzing the accident data. Some of these spots are Panchpota more, Chakdaha Choumatha, , Ranaghat court more, Nabadweep more, Jugpur market, Debagram more, Kaliganj and some other areas.

An officer said: “In order to check accidents on highways, more display boards will be set up along with relevant data to make people aware about hazards reckless driving. We would try to ensure that drivers follow a particular speed at