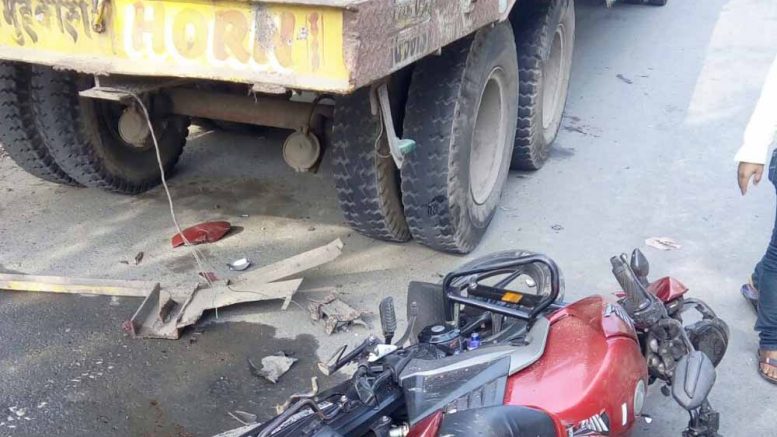 Motorbike of Rakesh Kundu lying on the road near the lorry

Chakdaha, April 6: A sub inspector of Calcutta Traffic Police died in an accident on Chakdaha-Banagram road on Thursday morning when he rammed on to a stationary lorry while riding his motorcycle in a very high speed to catch a Sealdah bound train from Chakdaha station. SI Rakesh Kundu (33), a resident of Gangnapur Rail Bazar, had died near Kamalpur due to fatal head and facial injuries as he hit the lorry from its back amidst poor visibility due to smog during the early hours of the morning.

The deceased cop had a helmet on his head, but unfortunately it was a “cap” helmet, which was not strong enough to protect his head.

Police sources claimed at about 5am Rakesh hit the stationary lorry in a high speed on its back. A patrolling van of Chakdah police took him to Chakdah state general hospital where he was declared dead.

His uncle Biswajit Kundu said: “Rakesh used to take train from Chakdah, 20km from home, keeping the bike at a two-wheeler’ shade there. He left home at about 4.30am as usual and police told us about the accident at about 6in the morning”.

Local sources said: “There was poor visibility in the early hours of morning. The biker could not notice the stationary lorries hit a lorry from the back in high.”

The deceased police officer, who joined Kolkata police three years ago, leaving teaching, was survived by his wife Arpita, a school teacher and a 4 year old daughter.

An officer of Chakdah police station said: “it is highly needed for the motor bikers to use appropriate helmets. The helmet the deceased cop used was not the ideal one. Rakesh’s body was handed over to family members after post mortem in Kalyani.