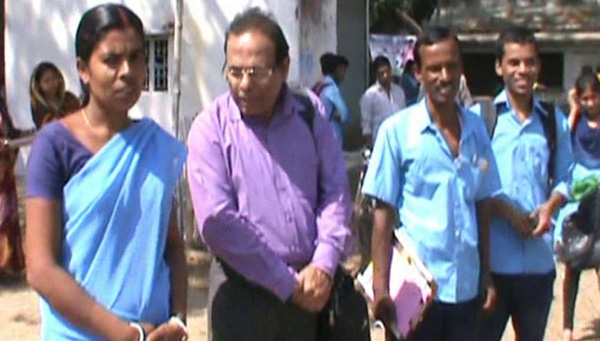 Balaram Mandal his wife Kalyani and son Bimal (all in blue uniform) coming out after appearing in HS examination. Picture by Tito Chakraborty

Ranaghat, Mar. 15: 47 year old Balaram Mondal, a farm labour from Nadia’s Hasnkhali and his wife Kalyani (35) today went a step forward to achieve their goal to become graduate. The couple who resumed studies two years ago with their son Bimal at class 11, almost after 29years since they left school, today appeared in the higher secondary examination together at the same venue.

The trio – Balaram, Kalyani and their son Bimal, who are students of Dhantala’s Hazrapur high school today written the answer scripts at Bahirgachi high school near Ranaghat in different rooms.

The couple today entered the examination venue with their son in a euphoric mood and completed the paper comfortably even though their age grabbed attention of the invigilators and other candidates.

An elated Balaram after the examination said: “We are very happy as all of us today performed well. Questions were quite easy and we expect good marks”.

Balaram, who was compelled to discontinue study at class nine owing to poverty and pressed to earn bread, had passed Madhyamik examination in 2013 from West Bengal council for Rabindra open schooling.

His wife Kalyani who too was a drop out at class 8 had passed the Madhyamik examination in last year from open school along with their son Biplab, who, however, appeared as a regular candidate from Patikabari Netaji Vidyapith.

“Situation forced us to leave study. A few years ago, I came to know about the open schooling system. I admitted to a Taherpur based study centre to pass Madhyamik examination. So when further opportunity came to continue study we decided to utilize it. We appealed the Hazrapur high school authorities to admit us along with our son to the higher secondary stream as regular candidate. We are happy that school responded to our appeal”, Balaram said.

Head master of Hazrapur high school Sujit Kumar Hota said: “We admitted them as regular candidate because as per law any person passed Madhyamik examination from any open Scholl are eligible to admit as regular candidate in higher secondary stream within three years since the year of passing. So they were admitted”.

On June 2015, Balaram and Kalyani admitted with their Son Biplab to class eleven’s arts stream.

With this the 8km cycle ride to school, courtesy “Sabuj Sathi”, began for Balaram, Kalyani and Bimal who mingled up with 96 other students of the class.

Today was a landmark day for couple’s on Biplab, got over 70% marks in Madhyamik. He said: “It is a great experience to appear in HS examination with Baba and Maa. I would be happy to do my graduation with them too similarly”.

Kalyani, who helps Balaram in work said: “Our passion actually materialized due to support of our son and the teachers. Our son prepared notes for us and regularly monitored our progress. He became a real guide. We are hope to become graduate in this way, which is our actual goal”.

The couple’s endeavor told upon their daily earning as they often miss daily job as labour owing to school timing.

“It becomes tough to manage time. My earning dropped, but we did not give up. We woke up at 4 am and study for about an hour then I do the household jobs while my wife cooks food. At about 6 I left for field and return by 9.30 am. Then I take bath and food to leave for school by cycle along with our son and wife. We return by 4.30 in the afternoon and then I and again leave to do the remaining job in the field. We reunited in the evening to study together”, said Balaram.