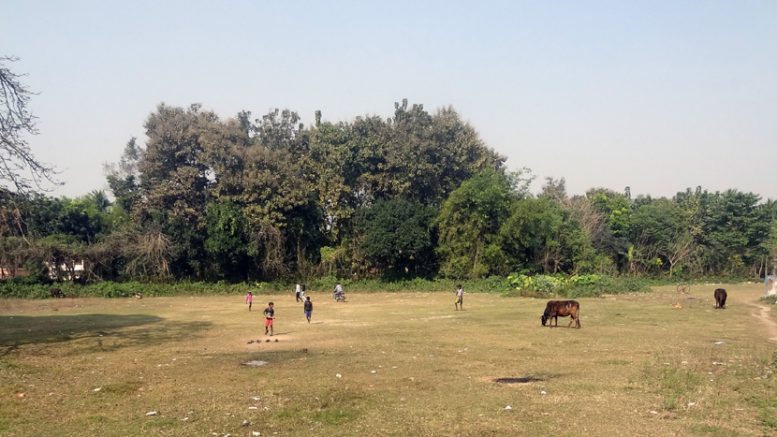 The land gifted by Krishnanagar Municipality

Krishnanagar, Jan.19: As a mark of its respect, the Krishnanagar Municipality has gifted a piece of 5-bigha land to the Dwijendralal Roy College in the town on the occasion of the college’s 50th anniversary. The sprawling land located in Radhanagar area (Ward-4) on Krishnanagar-Majhdia (Annapurna Road) has been awarded to the college on lease for 99 years against a paltry monthly rent of Rupees 1050. The college authorities have decided to construct a new campus on this land to open a law college and the post graduate faculties. The land has been registered in favour of the DL Roy College, formerly known as Krishnanagar College of Commerce, on December 29. Municipality chairman Ashim Kumar Saha and college principal Sahajahan Ali signed the agreement. However, the state government waived the registration cost of the land, a hopping Rs.42-lakhs showing a great gesture.

Chairman of Krishnanagar Municipality Ashim Kumar Saha, who is former student of the college, said: “We would be happier if we could give it absolutely free of cost. But it is a government land, so we charged the minimum possible amount as rent. It is a gift to the college by the Municipality on behalf of the people of Krishnanagar. The land has been awarded to the college only after Chief Minister Mamata Banerjee consented to our proposal. She given her nod for sake of education”.

College principal Sahajahan Ali said: “It is really a great gesture by the Municipality. The land is quite big and it would help us solve the crisis for space that halted our expansion. We would like to build a new campus on the new land where we would accommodate post graduate courses of commerce and arts faculties. We would also set up a law college and an institute of cost accounting there”.

The DL Roy college was set up in Krishnanagar in 1968 on Anantahari Mitra lane. It was then known as Krishnanagar College of Commerce, where exclusively commerce education was imparted. The college was renamed in 1991 as DL Roy college. In 2003 the college opened arts faculties. At present apart from commerce subjects, bachelor’s courses are offered in five arts subjects.

Principal Sahajahan Ali said: “Since 2003 when arts faculty was introduced , the college witnessed an influx of student. To match the need of time we introduced some job oriented professional courses using available spaces in the existing campus. But, the law college project and post graduate faculties could not be taken up for lack of space”.

“We took up the law college project in particular as now a days law as a subject has emerged with versatile avenues to develop employment opportunities. There is no government run law college in adjacent areas. We therefore already sought permission from UGC and central law ministry to set up the college’.

Sujan Sarkar, a lecturer in History said: “We are hopeful that the new campus would come as a great help to the students of remote rural areas of the district to pursue their dream with mainstream as well as professional education’.