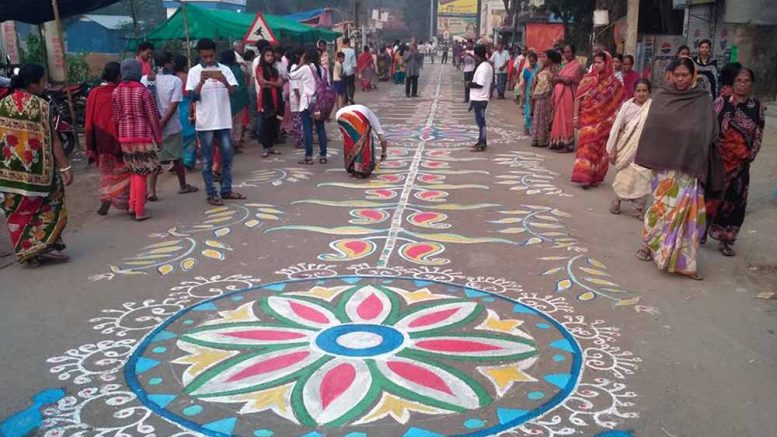 Phulia, Oct. 29: Residents of Nadia’s Phulia on Sunday morning woke up to a spectacular view as they found that 3km stretch in their locality turned into a canvas of colors with ‘street alpana’ drawn by about 875 artistes and general people responding to a request by a social organization. Organized by ‘Junior 100 Foundation’, these artistes and common people from different age groups and social identities took barely 10 hours to draw this ‘street alpana’, which it claimed is the ‘longest’ in the world so far. The organization would also approach the ‘Guinness Book of World Records’ authorities for inclusion their initiative to the record book,.

On Saturday 25 groups with 35 members in each had started the art work at 9pm from Phulia bus stand and completed alpana in the entire 3km stretch at Sabujpally making it the ‘longest’ alpana using 2800 liters of acrylic paints of 4 different colors a little after the local residents woke up at 7am on Sunday morning.

‘Alpana’, is a traditional Bengali motif art drawn on floor with paste of rice in the Bengali household as a A long stretch of street alpona in Phulia. Picture by Sovon Chaudhuri

sacred mark, which, however, could little be seen now. “Earlier we have seen senior women in household used to draw it during pujas and festivals at home. But, now the culture of drawing such alpona is rarely seen. Printed alpona in the form of transparent stickers have replaced this domestic traditional art in hour home”, said one of the organizers.

On September 18 this year, a Durga puja committee in Calcutta had drawn 1.2km street alpana on the Lake Road surpassing the Dhaka’s record. Today Phulia set up a new record with 3km street alpana.

Junior 100 Foundation’s cultural secretary Abhinaba Basak said:”Our aim is not indulging any competition, rather to revive a passion to learn Bengal’s traditional art among the young generation. With this objective we tried to make it as long as possible, which eventually become the longest one”. A coloorful rangoli painted by artistes in Phulia. Picture by Sovon Chaudhuri

Debabrata Pal (28), a graduate in Fine Arts, who took part in painting today, said: “with such initiative people would experience the pleasant look of traditional motifs synonymous with Bengali culture”. With such pleasure, girls like Moushumi Biswas (22), an MA 2nd year student and students like Arijit Debnath of class V took up the brush to paint the street.

The initiative received cooperation from police administration, as it suspended traffic movement keeping an alternative road open while painting was in progress.