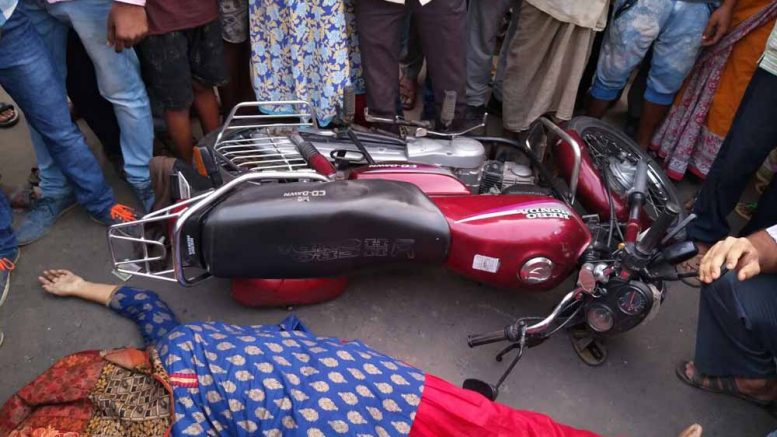 Krishnanagar, Oct. 30: A 43-year-old woman, who was riding the pillion of a motorbike with her husband without helmet, was crushed under wheels of a truck when she fell on the road being hit by it at a crossing during the early hours Monday morning in Nadia’s Krishnanagar.

Police said, the woman, identified as Gayetri Chakraborty died on the spot as the rear wheels of the truck run over head leaving her dead on the spot. The victim’s husband Asish Chakraborty, an employee of postal department had suffered serious injuries and admitted to Saktinagar district hospital where he has been battling for life.

The accident occurred at about 5.30am, when the couple was approaching to a Jagadhatri puja pandal in the town riding a bike.

Police said none of victim or her husband had helmet on their head while riding the motorbike.

The incident ignited mob fury as they protested blocked RN Tagore road for about half-an hour accusing the police of negligence that helped the truck to enter inside the town despite strict prohibition.

“It appears that there was no police checking at the entry points of the town despite a restriction imposed by the police administration. Such negligence encourages errant drivers to drive recklessly that today took the life of the woman” – Arnab Dutta, a morning walker.

Police have, however, arrested the driver and cleaner of the truck and started a case for culpable homicide not amounting to murder.

According to family sources, the couple left home during the wee hours of Monday morning to visit the puja pandals in a bid to avoid the evening rush.

“They planned to visit the Jagadhatri puja pandals during last night. But, the heavy rush in the town changed their mind as they decided to visit early on Monday morning when there would be little crowd. So they left quite early riding the bike keeping their son at home who was sleeping”, a relative of the victim said.

The couple met with the accident near Sadar hospital crossing, when a truck without taking a “u” turn came straight to enter a road and hit the bike. Gayetri who was sitting on the pillion fell on the ground and crushed under the wheels.