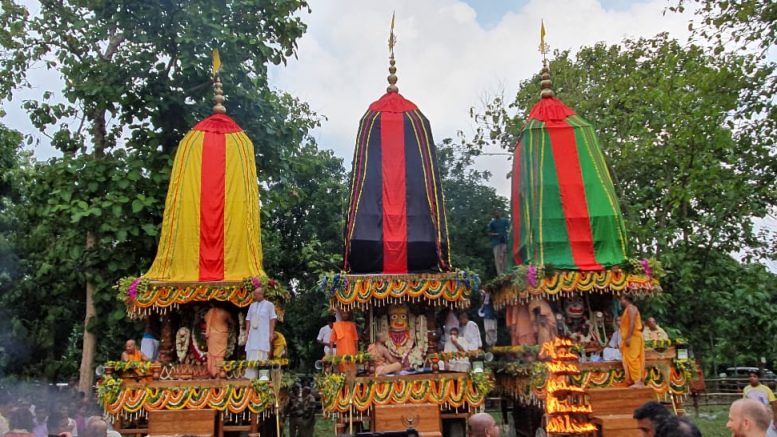 Lord Jagannath's Chariot at the Iskcon temple premise in Mayapur

MAYAPUR: Around fifty thousand devotees from across the country as well as from at least 80 countries like Italy, France, Brazil, Spain, UK, US, China, Russia took part in Lord Jagannath Rath Yatra festival organised by International Society for Krishna Consciousness (ISKCON) at its headquarter in Nadia’s Mayapur on Thursday. The

festival was inaugurated at the Iskcon’s Rajapur Jagannath temple by state security advisor and former DG of Bengal police Surajit Kar Purkayastha, who pulled the chariot to mark the beginning of the festival. The Yatra ends at the Gundicha temple, located six kilometers away near the Iskcon’s main premise. Started in 1967 at San Francisco by Iskcon founder Acharya AC Bhaktivedanta Swami Prabhupada, Lord Jagannath Rath Yatra is being celebrated at more than 1000 centers of the Iskcon across the globe.