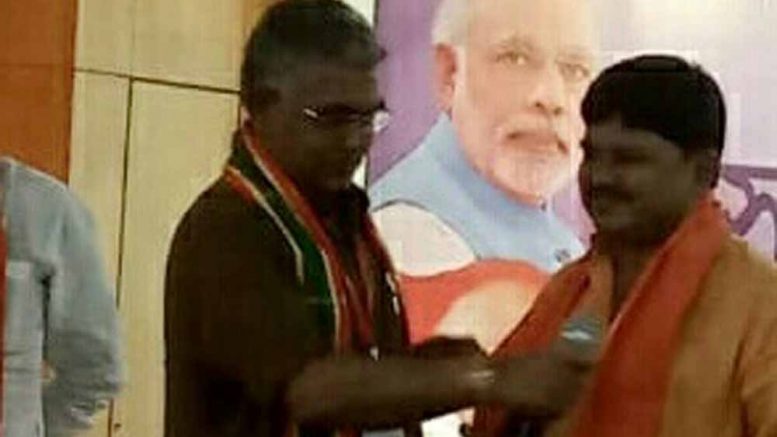 The exit of Bankim Ghosh, who even attended senior party leader Surjakanta Mishra’s meeting in Krishnagar on July 5, has meanwhile shocked the party workers. The party, however, in a quick reaction expelled him summarily on disciplinary grounds from the Nadia district secretariate.

Welcoming Bankim Ghosh to BJP, Dilip Ghosh said, “Bankim babu today joined us to save democracy in our Bengal”

Bankim Ghosh’s joining to BJP meanwhile created speculation about a possible erosion in the CPM support base in Haringhata and adjacent areas he is quite popular and still enjoys a strong support base. Justifying his decision to BJP, former CPM MLA said, “A mental distance was created between me and CPM. It is quite unfortunate that CPM during the past few years miserably failed to extend support to the party workers while facing the atrocities of the ruling party. The party never even tried to combat the repeated attacks on them which damaged their morale”.

“The BJP despite its poor organizational strength than us tried best to combat the atrocities of Trinamul and stood by its party workers and eventually got the results. Now a major chunk of CPM workers has joined BJP to save their lives. I was feeling alone in the party…with an obvious mental distance. But, my passion to work with people led me to join the BJP”, Bankim Ghosh added further.

Ghosh’s close associates in the CPM claimed that his exit from the party was a foregone conclusion.

“Ghosh has been fighting a lone battle in Haringhata. During the past few years, he was physically attacked by Trinamul activists on a number of occasions but never got much support from party leadership which largely remained inactive. He off late developed proximity to BJP”, a CPM insider said.

“The party never even tried to combat the repeated attacks on them which damaged their morale. …The BJP despite its poor organizational strength than us tried best to combat the atrocities of Trinamul and stood by its party workers and eventually got the results”–Bankim Ghosh, former CPM MLA

BJP sources said in last month Ghosh made contact with Mukul Roy through a Nadia based BJP leader. On Sunday the BJP leadership summoned him to the state party office in Kolkata and asked to join the party formally.

A CPM Nadia secretariat member said, “We have information that he was hobnobbing with BJP indulging indiscipline among party workers. This became obvious during the Lok Sabha poll too when he was cautioned as well”.

CPM Nadia secretary Sumit De said, “Bankim Ghosh has been expelled for indiscipline as per section 19 and subsection 13 of party constitution since for maintaining a close relationship with enemies of the party”

Bankim Ghosh said, “This expulsion is now meaningless to me…”

State BJP sources claimed that Bankim Ghosh would soon be assigned special responsibility in developing the party’s organizational support base in the    Haringhata block, where the party has a leadership crisis.