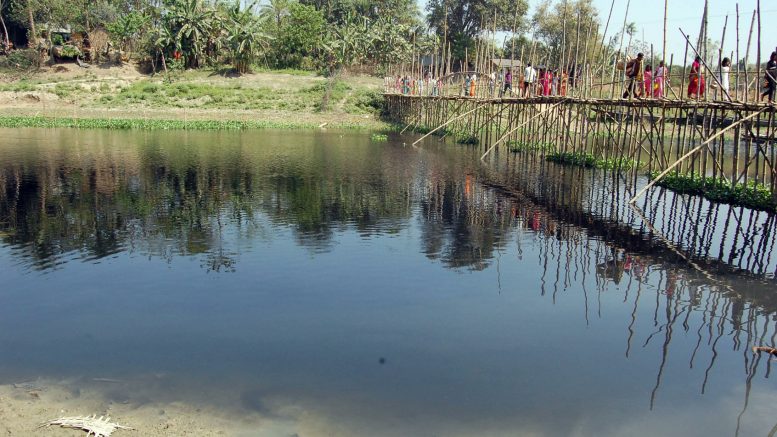 Delhi, May 26: West Bengal Chief Minister Mamata Banerjee today requested Prime Minister Narendra Modi to take up with Bangladesh Government the issue of pollution of Mathabhanga River which also flows through the country

In a bid to save these two rivers from pollution “Mathabhanga and Churni river rescue committee”, an organization of local people in Majhdia has launched a movement recently and submitted memorandum to the prime minister, president and chief minister also”

A report of state pollution control boar states that the Churni River is highly polluted having bio-chemical oxygen demand in the water as high as 12 mg/L (against a normal of 4-5 mg/L) due to organic substance.

According to sources in the Nadia administration, the Bangladeshi sugar manufacturing company is located on the bank of river Mathabhanga in Darshana town, where it discharges the waste.

After flowing about 19km up to Pabakhali from Gede, the Mathabhanga River has been divided into Ichamati and Churni. Ichamati entered North 24parganas to reach the Bay of Bengal (272km) while Churni met river Bhagirathi flowing about 56 km through Hanshkhali and Ranaghat.

Locals alleged that due to draining of the industrial effluent, the Mathabhang as well as in the Churni and Ichamati rivers courses remained polluted for a large part of the year.

“We are thankful to the chief minister because she has understood the problem and appraised the prime minister about the problem too. We have been trying to do this for long, but nothing has been done so far. Even the Bangladeshi officials who visited Nadia in recent past were also requested. But despite assuring action to stop discharging the industrial waste, they done very little so far”, secretary of the organization Swapan Bhowmik said.