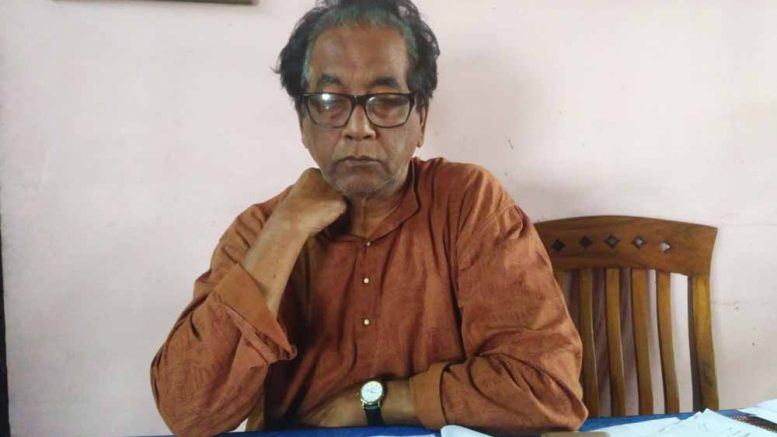 Kolkata, May 24: The state government has chosen eminent Bengali playwright – director Chandan Sen as the recipient of this year’s Dinabandhu Puraskar.

Sen, originally a resident of Chakdaha in Nadia and associated with local theatre group HaZaBaRaLa, who has penned popular plays like ‘Dui Huzurer Gappo’, ‘Gyan Brikkher Phal’, ‘Dayabaddha’, ‘Aniket Sandhya’, ‘Phirey Eso Prem’, ‘Bipajjanak’, has been chosen for the award for his lifetime contribution to the Bengali theatre.

The Dinabandhu puraskar, named after playwright Dinabandhu Mitra, is awarded by the state government in the field of theatre on the recommendation of Paschimbanga Rajya Natya Academy. The award carries a citation, a memorabilia and a cash award of Rupees twentyfive thousand.

The award will be conferred to Sen by chief minister Mamata Banerjee during poet Kazi Nazrul Islam’s birth anniversary celebration at Nazrul Teertha in New Town on Friday.

Sen said: “I am thankful to the state government for this recognition. However, it is the love and appreciation of the viewers that matters ultimately”.

“I always tried to depict the conflict of values, the lost tradition and basic human instincts in different characters which the viewers can easily relate as they find those characters in their daily life” – Chandan Sen

Sen’s selection for the award, being a communist and a known face of former chief minister Budhdhadeb Bhattacharyay’s cultural clan, bears special significance as even a few months ago the Bengali theatre world was widely divided in two camps with a group of theatre personalities, apparently owing allegiance to Trinamul Congress, counter-attacking the Leftist personalities. The situation took such a passe that many leftist personalities humbly rejected awards and honors offered by the state government.

Chandan Sen has been active in theatre for over 40 years. He has so far penned about 30 plays, half of which are original while the rests are adaptation. Eminent theatre groups of Kolkata like Sayak, Theatre Workshop, Sansta have been staging his plays for long.

According to theatre lovers , Sen’s USP is his presentation delicate human feeling and problems blended with contemporary sociology political issues.

Sen’s play like “Aniket Sandhya”, a milestone in his career depicts solitude and suffering of the elderly citizens in a materialistic social structure that touches the heart of the viewers.

“I always tried to depict the conflict of values, the lost tradition and basic human instincts in different characters which the viewers can easily relate as they find those characters in their daily life”, said Sen.

Sen’s recently released play ‘Bipajjanak’, an original script vividly depicts the issue of intolerance. The play being produced by HaZaBaRaLa and directed by Sen himself has already become a hit.

Set on the life of a fictional Delhi based Bengali professor, who was asked to leave the country for writing an article titled “Patriotism – A questionable abstract noun”, published in a English daily, the play “Bipajjanak” (Dangerous) has aimed to convey that freedom of expression will continue to remain under siege unless we accept that people can have different opinions and beliefs in a country, which practices democracy.

Sen strongly feels that intolerance stems from an invincible assumption of the infallibility of one’s beliefs and a dogmatic conviction about their rightness. One criterion to determine whether a country is truly democratic is the extent of dissent permitted.

Renowned actor Debsankar Halder portrayed the central protagonist, the ‘Bipajjanak’ Bengali professor named Tirthankar also feels so. He said: “Today we have reached a stage where expression of a different point of view is viewed with resentment and hostility, without realizing the reality. The country which speaks for tolerance never preached its citizen in practical way”.