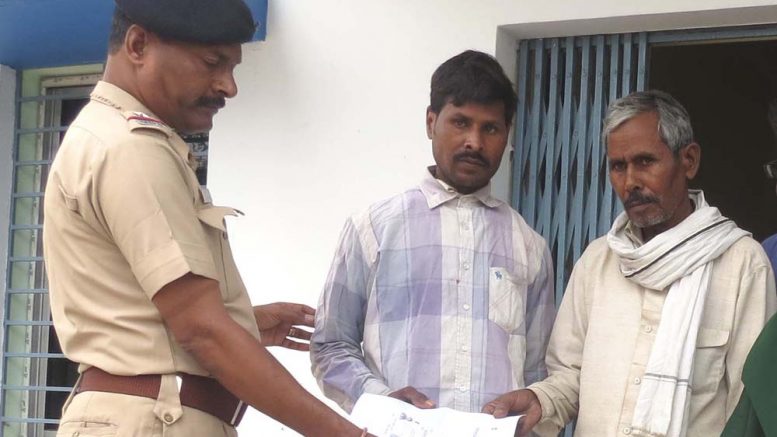 Abhoy Kumar (centre) with his father and a police officer in Karimpur. Picture by Ashis Pramanik

Karimpur, March 16: A 36 year old mentally ill man from Uttar Pradesh was reunited with his parents in Nadia’s Karimpur 40 days after since he went missing from his home in Pratapgarh. Elderly couple Ram Das and his wife Israwati Devi had lost all hopes to get their eldest son Abhoy Kumar back home. But, a call from Karimpur police on Wednesday morning brought smile to their face as they arrived to this bordering town in Nadia from Pratapgarh to be reunited with him.

On Friday morning Karimpur police handed over Abhoy Kumar to the elderly couple, in presence of some Trinamul Congress activists, who actually traced out him out in last week while scanning movement of suspected outsiders in their village – Majlishpur being inspired by advice of chief minister Mamata Banerjee.

Father of three boys aged, 10, 8 and 5, Abhoy went missing on February 6 when he left home to visit in-law’s house in Raniganj, 18km from Pratapgarh. His father Ram Das said: “Abhoy had developed a symptom of declining memory during past few months. But, this is the first time he left home. He is under medication, but he used to skip medicine, which probably made its impact. We lost all hopes to get him back, but a call by Karimpur police raised hope finally.

Karimpur-1 block president of Trinamul youth congress Arun Biswas said: “We regularly keep close watch on suspected movements of unknown and outsiders in our village as advised by our chief minister. During such scanning we noticed a Hindi speaking man who was roaming suspiciously. So to ensure his safety and to find out his whereabouts we handed him over to police”.

Nisith Biswas, who first traced out Abhoy Kumar, said: “He was speaking inconsistently. It appeared to us that he is not mentally fit enough”.

An officer of Karimpur police said: “Once some local youths handed over the man we started interrogation, but he could not clearly inform us about his identity details. However, during a search to find a clue we luckily got a copy of aadhar card. We then made contact with Pratapgarh police station in Uttar Pradesh, who confirmed identity of Abhoy. His parents later contacted us when we told him to take back their son home”.

Today a beaming Abhoy recognized his parents. He said: “I am feeling great. I don’t know what happened to me. But, I can recall everything now. Now I am eagerly waiting to see my children”.