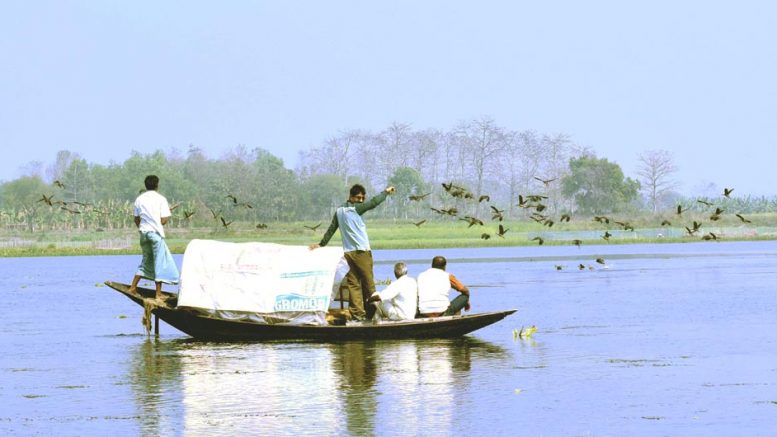 Fishermen on vigil at Damos Bill in Tehatta

Tehatta, March 16: Fishermen in Nadia’s Tehatta have come up to protect the migratory birds those visit a water body in their area during winter and autumn so that the birds do not fell prey to the poachers. Since November last year the members of Shyamnagar-Chitka Fishermen’s Cooperative Society have remained vigilant on the vast Damos bill in Fataipur village spanned over 55acres of land round the clock sailing in boats in different groups to protect the birds from the poachers. The fishermen are also launched awareness programme to develop alertness among the villagers so that they could spot the poachers and hand over them to police if found in the area.

The fishermen took this initiative during October last year after witnessing a huge number of migratory birds fallen victims to the poachers earlier in the year. They called a meeting and unanimously vowed to protect the birds from the poachers. Secretary of the fishermen’s body Achintya Mandal said: “The gory scene of birds being killed at random by poachers using air guns pained us a lot. We felt helpless then. But, this time we planned quite earlier and decided not to allow the poachers close to the bil. We also involved the local villagers so that they could also become vigilant to protect the birds and to spot the poachers. At the same time the forest officials extended their support to us”.

“This is a great effort by the fishermen. We have also extended full support to them when we came to know about their initiative. We have also circulated leaflets among the villagers encouraging them to come up to protect the birds”  – Rana Dutta, DFO

“These birds with their arrival enhance beauty of bill every year during this season. But, a section of people want to enjoy their beauty with their tongues. During January 2017 they killed large number of birds using air gun, gulti, which forced the birds to depart early last year. So we decided to stop this attack on this beautiful creature of the nature. We held meetings and urged our members to form team to protect birds, while they sail for fishing purpose. I just told them to be watchful”, said Secretary Achintya Mandal.

As a consequence in the appeal 347 members of the fishermen’s cooperative in 7 boats started vigilance in small groups.

Fishermen like Sarifuddin Seikh, Zibrail Mandal, and Chaitanya Mandal said: “We have divided the bill in seven zones and engaged one boat for each zone where we keep our vigilance”.

Pralay Bhattacharyya, a physician who also runs a nature care organization in the area said. “Fishermen have not just prevented poaching rather given the birds a respite”.

Divisional Forest Officer (Nadia-Murshidabad) Rana Dutta said: “This is a great effort by the fishermen. We also extended full support to them when we came to know about their initiative. We also circulated leaflets among the villagers encouraging them to come up to protect the birds”.