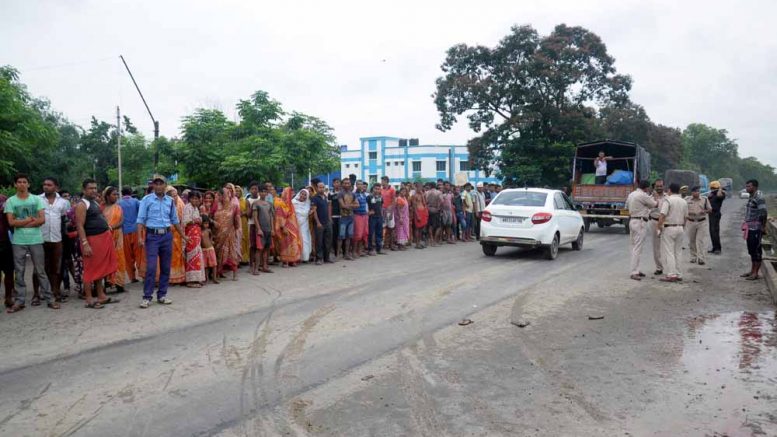 The muddy stretch of NH34 in Dhubulia. Picture by Pranab Debnath

Krishnanagar, June 20: A rain soaked  muddy stretch of NH34 being developed as four lane tracks today led a mini truck to lose control and hit three pedestrians killing two of them on the spot in Nadia’s Dhubulia.

The Calcutta bound mini truck carrying chickens  lost control while taking a turn on the muddy stretch of road and hit the pedestrians waiting on a divider being constructed under the four lane project of NH34 from Krishnanagar to Berhampur.

The widening work of the 78km stretch being carried out by NH project authority’s Krishnanagar unit, has been largely completed in major parts of the stretch except some beautification and allied works.

In Dhubulia earth was stacked along the stretch for plantation work which made the road slippery and vulnerable to accidents following the incessant rain.

The incident angered the locals who blocked the traffic movement for about half an hour accusing the NH34 authorities. Police, however, pacified the mob and resumed traffic movement.

The widening work that began in 2012 was delayed for encroachment. It was restarted on October 4 last year. The unfinished stretches in many areas made the road vulnerable to accident.

Today accident occurred near Mayakol crossing,110km from Calcutta, at about 11.30am. The victims of the accident in Dhubulia. Picture by Pranab Debnath

Project Director, NH, Krishnanagar Sugata Saha expressed ignorance about the stacked soil that made the road slippery. He, however, said: ” I have no knowledge about the accident and about the alleged stacking of soil. If it was stacked there it was done by mistake which is regretted”.

Meanwhile, Police have seized the killer vehicle. But the driver of the vehicle went absconding.

Local sources said, the mini truck carrying chickens lost control while taking a turn through the crowded crossing and dashed the newly constructed concrete divider before rammed on the waiting pedestrians.

While some pedestrians managed to escape, three were mowed by the mini track.

Manik Ghosh said, an eye witness said: “The soil kept along the road made driving miserable. During past one month a number of accidents occurred here. The most common victims are bikers, who fell on the ground and got serious injuries as their wheels skidded on the muddy road. The repeated rains during the period made things worst”.

A police officer said: The new road that became contaminated with mud become slippery due to rain. The problem of mud on highway need to be solved seriously by the NH authority’ otherwise more such accidents would occur”.

A police officer of Dhubulia police station alleged that despite repeated appeals the NH34 authorities so far taken no action to clear the road.

Nadia police superintendent Sheesh Ram Jhajharia said: “We would talk again with the NH34 authorities so that the stretches of NH34 become clear and smooth for driving”.

Project Director Sougata Saha said: “we would take care so that such accidents do not occur at our fault”.