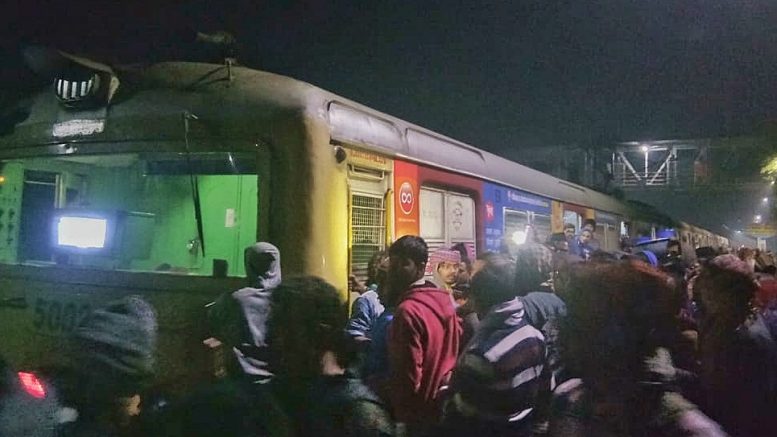 Phulia, Jan. 16: The motorman of a Santipur bound EMU train from Sealdah, created a panic among the passengers on Wednesday night when he failed to stop the train at the Phulia station skipping it at high speed. The train was eventually stopped at unscheduled Bathna-Krittibas station, the next one, by its guard leading to an unruly situation.

Angry passengers who disembarked at the Bathna-Krittibas station detained the train and allegedly manhandled motorman S.K.Das accusing him of being drunk, which, the Eastern Railway authorities denied.

The railway authorities have ordered an inquiry into the matter, while the passengers who were traveling on the train on Wednesday night reiterated that motorman was in an inebriated state and claimed to have seen him taking alcohol in the water bottle.

The ER authorities later at about 1.40 AM brought an empty rake to Bathna-Krittibas station to drop the over-carried passengers in Phulia station. The railway authorities have ordered an inquiry into the incident.

The 31539 up Santipur local had left Sealdah at 9.50 PM and was scheduled to arrive in Phulia station at 11.53 PM. But, the passengers claimed that after departing Habibpur station, the motorman picked up speed and skipped the scheduled stoppage in Phulia unleashing panic among passengers.

“It suddenly turned to be a horrible situation…”, said Sanjit Sandhukhan, a cheese vendor from Phulia. “I along with some other passengers was preparing to disembark in Phulia after the train left Habibpur. But the train continued to go on the high speed it picked up while leaving Habibpur and skipped the Phulia station. The train was earlier on many stations arrived before schedule and was detained”, Sandhukhan said.

“We all turned afraid. We thought that the motorman lost control over the train. I heard many passengers from adjacent coaches raising voice in panic. But, a few minutes later the speed decreased and the train stopped in Bathna-Krittibas station relieving us from panic”, Sandhukhan further added.

In Bathna-Krittibas passengers rushed into the motorman’s cabin and manhandled him. The guard meanwhile rushed into the spot. Watching the train took a stop at the unscheduled station, local residents also rushed into the platform and joined the agitation. A team of Santipur police and RPF from Santipur station arrived at the spot and controlled the situation.

Balaram Ghosh, a local resident said, “We were surprised to see the train at the station. When we saw the passengers gathered in front of the motorman’s cabin, we went there. It appeared to us that the motorman was drunk”.

When contacted a spokesperson of Eastern Railway said, “We have conducted a breath analyzer test on the motorman and the guard, which, however, did not detect any alcohol content in their blood”.

“It is not clear why the motorman failed to stop the train in Phulia and how it was eventually stopped in Bathna-Krittibas. An inquiry has been ordered to find out the answers”, the spokesperson added.

The passengers of the train, however, rubbished the claim. “We are quite sure that the motorman was drunk and there could be an accident unless the guard stopped the train. The ER authorities have been lying to avoid embarrassment”, a passenger of the train said.