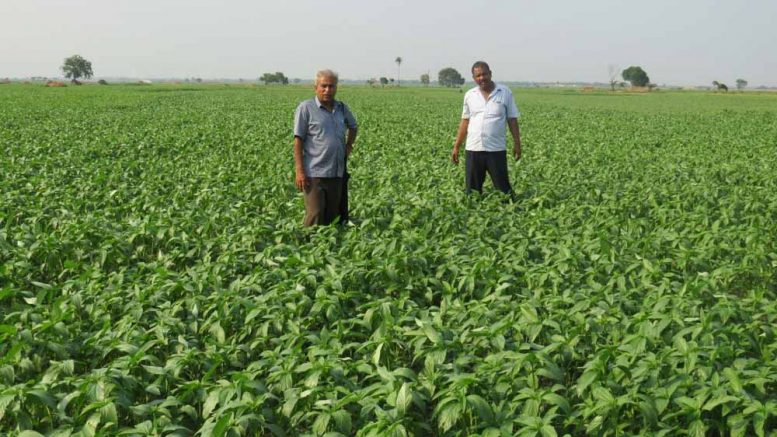 Krishnanagar, Dec. 8: The farmers live close to Indo-Bangladesh border areas in Nadia and Murshidabad district who were advised to cultivate mustard by state government as an alternative to wheat, are encountered with serious objections from the Border Security Force.

The state government in August declared ‘wheat holiday’ in these two districts banning its cultivation for two years to avoid spreading of suspected “wheat-blast” disease and distributed free oil seeds for alternative cultivation being it a profitable cash crop.

But, in many areas, the BSF personnel patrolling the border have asked the farmers not to cultivate mustard as its full grown plants rise over 4ft and obstruct their vision on either side of the barbed wire fencing.

The objection has created major problems to the farmers who alleged it a threat to their survival. They requested agriculture department to take up the issue with the BSF.

Senior BSF officers said:  “The objection is not due to any prejudice about mustard; rather it is a general objection against any high rise crop. The mustard now a day’s become a high rise crop creating problems to the vision. The smugglers and criminals exploit it to lurk behind such plants”. A BSF officer said that generally plants over 2ft high or which grows over the knee level are not allowed.

In many areas under Raninagar of Murshidabad and in Nadia’s Krishnaganj, Chapra block farmers were prevented by the BSF jawans to cultivate mustard.

A farmer in Chapra said: “BSF jawans prevented me to sow mustard seeds in my land. They said no high rise crop will be allowed for cultivation. They also threatened to uproot it if cultivated. I eventually compelled to cultivate Mushur (Red Lentil)”.

Insan Seikh of Chapra were also forced to cultivate Mushur.

BSF in earlier occasion appealed state administration against cultivation of jute and banana within 100meters on either side of fencing as these block visibility. But, this is for the first time they raise any objection about mustard.

A BSF officer in Krishnanagar said: “In past we never raised objection against mustard as it was small plants then. But, the hybrid mustard now being widely cultivated has become a high rise crop with an average height of 4ft forcing us to change mind”.

Deputy Director of Agriculture Ranjan Roy Choudhury admitted the mustard seeds distributed among farmers belong to hybrid variety. He said: “It is true that these mustard plants are strong and bushy in nature which grew vigorously up to 4 ft. But, it does not bar visibility”.

“We advised farmers to cultivate mustard as a profitable crop alternative to wheat. But, if BSF prevents farmers they will be in trouble. We talked to the BSF officials on the issue in Murshidabad. They appeared to be convinced. Nevertheless, it is not clear why they are raising objection again”, Roy Choudhury added.

Deputy inspector general of BSF’s Murshidabad sector U.C. Hazarika said: “I have no idea where such objection raised. But, it is true that we generally oppose cultivation high rise crops. We request the farmers to avoid such cultivation to help us in vigilance”

DIG of BSF’s Krishnanagar sector B.L.Meena said: “We appeal farmers either to leave 100 meter free space close to fencing or to grow small plants so that visibility remain clear and vigilance can become easier. But, unfortunately the farmers never listen to our request”