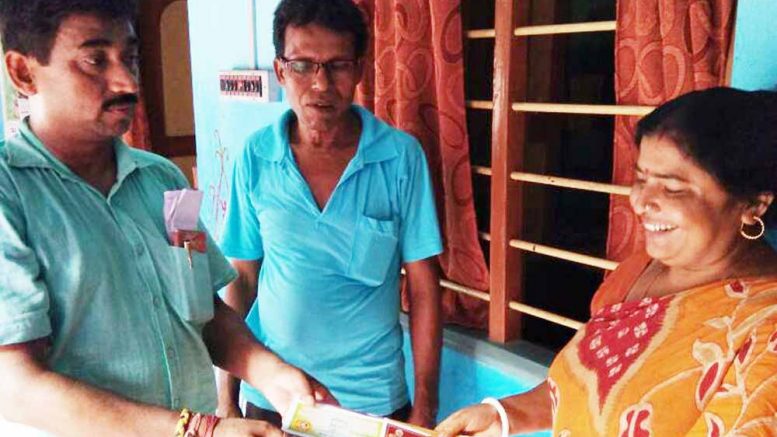 BJP workers speaking to a homemaker in Dhubulia. Picture by Pranab Debnath

The objective of the ” Vistar Yatra ” is to strengthen the party organization at the grassroots level. Under this initiative the party workers would go door to door to meet people, would make them aware about the life and works of Pandit Dindayal Upadhyay, a party ideologue and interact with them besides appraising them about the achievements and initiatives of Narendra Modi led government.

The endeavor taken in the birth centenary year of Deen Dayal Upadhyay would be continued for one year as during this period the party workers besides spreading Updadhyay’s ideas, would also communicate Narendra Modi Government’s welfare schemes for the poor across the country.

The imitative was launched by party president Amit Shah from Naxalbari in May 25 undertaking a major drive to strengthen the party organization across the country at the booth levels  involving  3,68,000 party workers  who would be devoting 15 days  outside their respective work area.

The BJP workers visited door to door today interacted with people, informed them about the welfare schemes introduced by the Government, handed over leaflets on the achievements.

Nadia BJP president Asutosh Pal said: “In the next few days we would try to visit maximum households under over 4500 booth areas. To achieve this target we have engaged 970 workers to cover the district, of which 400 joined today. Others will start work from tomorrow”.