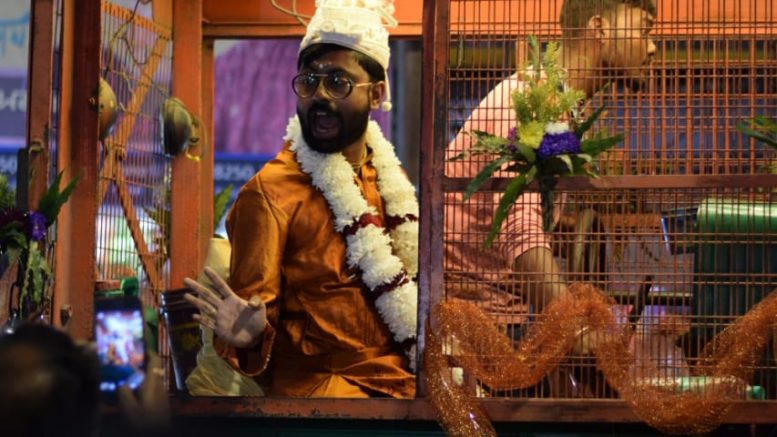 Arka Patra of Krishnanagar rides the road roller on way to wedding venue.

Krishnanagar, 28: Forget the horse drawn carriage or the sleek luxury cars to arrive as the groom at the venue of marriage any more. A young jewelry shop owner became talk of the town when he took a 2km ride on a huge road roller to arrive at his wedding venue on Sunday night in Nadia’s Krishnanagar.

People were surprised when they noticed Arka Patra, 29, in his wedding attire approaching through the busy roads riding the huge road roller decorated with flowers.

A huge crowd gathered on the road and people began taking photographs using their mobile phones when they realized that the youth on the road roller riding ahead towards the venue of his marriage near the town bus stand.

The groom, a jewelry shop owner and resident of Sonapatti area of the town to make his wedding ceremony a “remarkable” event with a difference, took the 2km road roller ride to reach the venue of his marriage with long time girl friend Arundhuti of Ukilpara at Municipality’s tourist lodge near bus stand.

The huge road roller weighing 20tonnes that Arka hired from a local civil contractor in the town. It took nearly an hour to cross the 2km distance not just for its snail pace, rather to satisfy people with photo opportunity.

“I had a plan to make my wedding very special in some ways…Travelling medium to the venue is one of them. But, I did not expect to grab people’s attention in that way. The 2km journey eventually appeared to me as a long one as people zoomed in on the road to have a look of my ride. It is really a nice experience that people liked my choice”, Arka said. The plan was initially conceived by Arka, a commerce graduate and son of a late Goldsmith, following a mutual consultation with her bride Arundhuti. Later Arka shared it with his mother Rita Patra and father in law Kiriti Tarafdar, a dentist by profession.

“My initial plan was to arrive at the venue riding a JCB. But, I came know that a farmer from Karnataka in last year has already done it. Then the idea of riding a road roller came to. I shared it with mother and the in-laws family who also approved my idea”, Arka said.

In last year Chetan, a JCB operator from Karnataka, drawn attention when decide to active at marriage venue riding on the machine that help him to earn bread.

Arka’s long time associate Nadu Seikh, flower decoration come up to materialize the concept. “It was Nadu da who arranged the road roller from civil contractor Sisir Karmakar, who is also local Trinamul councilor. He was also stunned hearing my plan. The cost of hiring and decoration was Rupees three thousand only.

The marriage party consisting of 90 persons followed Arka on a “vintage” mini bus that once ran in the city of joy.

“The maroon yellow color mini bus of Kolkata fascinates me very much. So I hired one from Kolkata for the elderly people while the younger ones walked behind the roller to reach the venue”, he added.

Arka’s father in law Kiriti Tarafder said, “The idea was unique and unconventional. So I accorded my approval…”

Arka’s newly Wed wife Arundhuti is elated knowing about the enthusiasm among public. “It is great feeling that our marriage became talk of the town But, I missed the ride…”she said.

Arundhuti missed the joy ride on the road roller as Arka took her home on Monday evening riding a car.