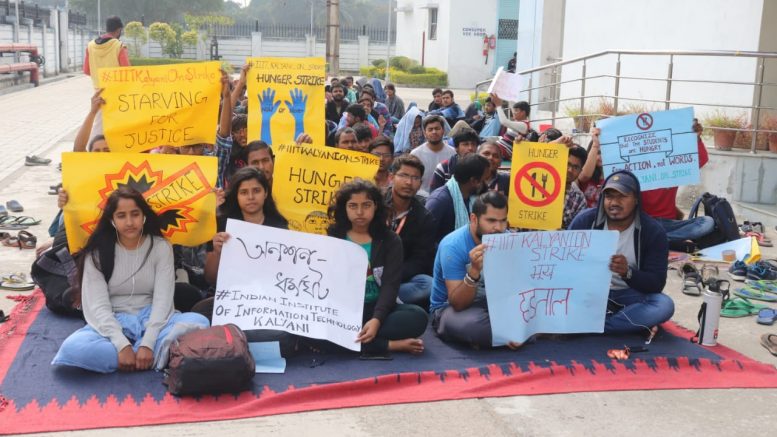 Agitating IIIT students at the Webel IT Park in Kalyani

Kalyani, Jan. 27: 35 students of Kalyani based Indian Institute of Information Technology (IIIT) pursuing BTech in Computer Science and Engineering have begun fast unto death from Sunday protesting apathetic attitude of the Institute administration since it failed to come up with a assurance to shift them to a well equipped campus from the temporary one.

The fasting students include 29 boys and 6 girls, whereas around 350 more students meanwhile continued to demonstrate round the clock at the Webel IT park premise, where classes are being held temporarily.

On Sunday evening Registrar, Assistant Registrar of IIIT as well as representatives of district administration led by Kalyani SDO met the students and urged them to withdraw the strike, but the students categorically told them that Students begun boycotting classes since January 18 demanding that they be shifted to better campus as the poor infrastructure and facilities at the temporary campus put them far behind than any other similar institution in the country. Since the mentor director professor Partha Pratim Chakraborty did not give them a clear assurance to shift them to a better campus, the students on Sunday wrote a letter to union minister of human resource development Prakash Javadekar appraising about their decision of indefinite hunger strike and seeking his intervention as well to solve this problem.

In the letter to MHRD the students have apprised the minister that they have decided to go for indefinite hunger strike until they are shifted to any ‘National level technical institute’. “We need a campus which can provide us basic facilities to pursue our course study”, an agitating student said.

“We need direct intervention of the minister as the Registrar, Executive Director as well as the Mentor Director failed to provide us a clear assurance to satisfy our minimum demand”, the students added.

“The IIIT authorities are making fun with our future. They are taking Rupees Three lakhs every year from us, but not providing the basic facilities like classroom, laboratory, updated computer systems and good hostel”, agitating students alleged.

On Sunday afternoon institute’s registrar Professor Sambhunath Dutta, assistant registrar Madhumita Sengupta and sub divisional officer Unis Rishin Ismail met the agitating students and requested them to withdraw their hunger strike. But, students refused as the authorities could not convey any assurance about their main demand _ shifting of campus.

Assistant Registrar Madhumita Sengupta said, “We have assured the students to meet all of their demands except the shifting of campus as it is not within our jurisdiction to give any assistance”.

An agitating student said, “Shifting of campus is our main demand. We cannot compromise with our future any more. There have been repeated assurances since the institute set up and the authorities have been playing with our career”.

This is a college of National importance, but here is nothing of that standard. We are gradually going far behind than students of other similar institutions. We therefore demand to shift us to a properly equipped campus, preferably any National level institute or at the campus of our mentor institute IIT Kharagpur, so that we could get all facilities required for our study”, another student added.

The IIIT-Kalyani is one of 20 IIIT projects envisaged and developed by the UPA government on PPP basis as a joint venture by union ministry of HRD, state government and private enterprise as a premium non-profit making institute.

On June 30, 2015 chief minister Mamata Banerjee laid the foundation stone of Rupees 128-crore project for independent campus of IIIT-Kalyani on a 50-acre land beside Kalyani Expressway. CPWD began the construction work, but so far only boundary wall was raised around the plot.

The classes initially began at private engineering college campus, but later shifted to Webel IT Park in park in Kalyani town. However, the institute has no permanent director. At present IIT Kharagpur director Partha Pratim Chakraborty has been looking after the institute as its mentor-director.

A student said, “The situation is horrible in the temporary campus. 350 students of four years and around twenty M Tech students are being forced to share only three rooms for their classes. More than three years have passed since the institute was launched, yet no permanent campus could be provided”