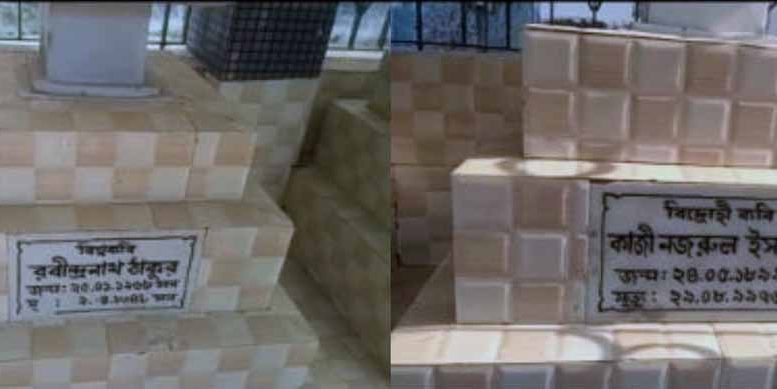 Nakashipara: Students and their guardians of Sudhakarpur High school in Jagannathpur village of Nadia’s Nakashipara burst into anger on Wednesday when they found that the stone plaques the school authorities have fixed below the bust of Rabindranath Tagore and Kazi Nazrul Islam installed at the campus are miserably wrong and have became a cause of their embarrassment.

The students and their guardians were at their further dismay when they found the plaque affixed below the bust of Kazi Nazrul Islam states August 29, 9976 as the poet’s death of demise instead of August 29, 1976.

Sanjit Seikh, a class ten student said, “We are just speechless watching the careless approach of our teachers who despite knowing that the plaques are erroneous went on to affix it below the busts. The plaques are embarrassing. Nevertheless, they did not bother to replace them”.

A student who refused to be identified said, “The plaques have put the school in a shame and raised question about the knowledge of our teachers who were entrusted the job”.

“The plaque of Rabindranath Tagore is quite misleading as it put the date of birth in erroneously following English calendar year whereas the demise date in Bengali calendar year. But both dates are miserably wrong. The authority could at least write the poet’s date of birth as “25 Boisakh” and “22 Shravan” with years, which have become landmark days to the people of Bengal. But, the school authorities have made a goof up”, the student added further.

“On the other hand Kazi Nazrul’s demise date appears as quite hilarious which states the year as 9976″, the student states.

Students and local resident appealed head master Pradip Kumar Roy on several occasions since the busts were installed, but he did nothing to rectify the mistakes.

Since the busts were installed, the school became a subject to prompting local residents to intervene. On Monday and Tuesday they again gathered at campus and urged head master Pradip Kumar Roy to replace the plaques immediately else they would bring the matter to the state education minister.

A visibly embarrassed head master Pradip Kumar Roy blamed the plaque designer for the mistake. But, he, however, give no explanation when asked how the erroneous plaques were allowed to affix.

He later claimed that the erroneous dates on the plaques were covered by paper, but students removed them to make it an issue.

“We put papers printing the actual dates below the busts of Tagore and Kazi Nazrul, but unfortunately students removed them. We have ordered new plaques with right dates which will be affixed soon”, Head master Roy said.